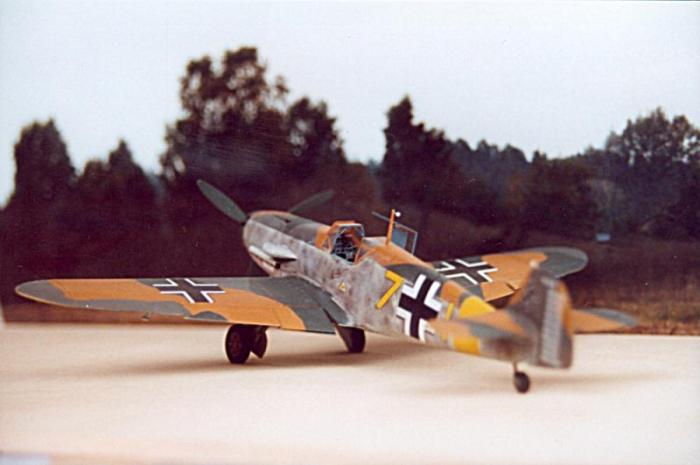 TedMamere
Yes! Did you shoot the pictures outside? I searched the web for good high resolution background pictures but found not many that were good enough. Does anybody know of a good source for such pictures? That Bf 109 looks very good Steffen... what is the light brown color you used? It seems to be very bright. Jean-luc
MAR 12, 2007 - 01:10 AM

alpha_tango
Hi Captain Do not get me started ... in short: JG 5 and 3 (at least) recieved several a/c that were built for the North African front and got the camo consisting of 78/79 with half high colour demarcation. In the factory the camo was adjusted for the new theatre of operations. So the darker colours were added. There is a very well know photo series of JG 3 getting their machines I forgot what I used, but it must be either 74/80/70/71 .The colours were from JPS (Jens Popp aka Don Color) he had 2 RLM79 then an I used the lighter more reddish colour (which in retrospect seems wrong, although the boxtop artwork suggests a similar colour). on unit level the sides of the a/c were later re-camouflaged (I assumed 76 with light 75 mottle) ... seee many pix in Prien JG 3...... ...... as I wrote don't get me started cheers Steffen
MAR 12, 2007 - 01:31 AM

SGTJKJ
Hi Once again, Jean-Luc, fantastic build and very impressive job on the camouflage. Thanks for sharing I saw this kit (ICM 109 F-4) when it was released. It looks like a beauty and is on my shopping list. Especially since I now have some insights on what to look out for in the kit as it is roughly the same as the F-2 Jean-Luc build. Very nice and colourful decals with a unusual camouflage scheme. I will go with the camouflage with the low demarkation line. Steffen, do you have a link to some of the pictures of the aircraft being handed over - before they were repainted with the high demarkation line? Steffen, by the way is your model a G or K? Just joking :-) :-) :-)
MAR 12, 2007 - 12:58 PM

alpha_tango
Hi Jesper I prefer books over most online photo sources and thus my knowledge where to find what illegal copy of say Crow or Petrick collection (to name a few well known collectors) is very limited its a rare K with another engine, weapons and canopy. Also the fuelling system ist different. The mainwheels are smaller and the tail wheel is of another type. Some less bumbs and humps ... still it is definitely a K cheers Steffen
MAR 12, 2007 - 03:16 PM

SGTJKJ
Hi Jesper I prefer books over most online photo sources and thus my knowledge where to find what illegal copy of say Crow or Petrick collection (to name a few well known collectors) is very limited cheers Steffen[/quote] Sure, I prefer books as well. I was not asking for illegal copies on the internet. On the other hand it is almost impossible to know if a picture is "illegal" when you find it on the net. I will just go for the paint scheme in the instructions
MAR 13, 2007 - 04:34 PM

alpha_tango
Hi Jesper in many (most) cases you'll see an illegal copy. But it is hard to tell which are not. In some cases I find it o.k. to post refpix from books for special questions (but stating the source!), as even a small collection of books like ... well, mine .. will cost you some body parts .. OTOH I started 12-13 years ago and got one expensive book each birthday and X-mas and then some when I could afford it .. the smaller books were bought when I ran into them .. somtimes a bargain sale at Midland or Penker also was expensive .. and always watch Amazon market place and ebay .. you can get Schnaeppchen there .... I would say you could stick with the instructions, as these are really well documented a/c ... btw I do not hav e the kit and cannot say for sure best wishes Steffen
MAR 13, 2007 - 04:56 PM

SGTJKJ
Very nice, Steffen. This is the camouflage I would like to do. However, I thought the camouflage would have a "harder" edge to it? The one in the post has a more "sprayed" appearence? Thanks a lot
MAR 14, 2007 - 04:38 PM
Go to Forum Topic
Copyright ©2021 by Jean-Luc Formery. Images also by copyright holder unless otherwise noted. The views and opinions expressed herein are solely the views and opinions of the authors and/or contributors to this Web site and do not necessarily represent the views and/or opinions of AeroScale, KitMaker Network, or Silver Star Enterrpises. Images also by copyright holder unless otherwise noted. Opinions expressed are those of the author(s) and not necessarily those of AeroScale. All rights reserved. Originally published on: 2007-03-10 00:00:00. Unique Reads: 10991