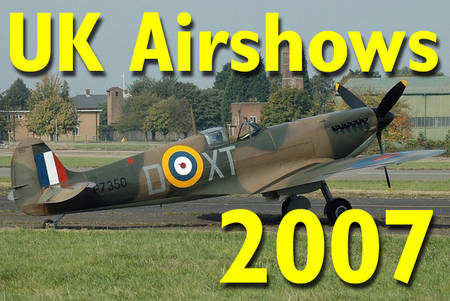 In the UK, as the evenings start to get lighter and the weather improves, the mind starts to wander towards thoughts of long summer days and blue skies. And that means Airshow Season is approaching. Highlights of 2007 include the reappearance of the BBMFs Lancaster in its new Phantom Of The Ruhr livery and the welcome return to the skies of a Vulcan bomber. Hopefully P-38 Glacier Girl will be displaying in the UK this year also. Heres a list of dates for scheduled airshows in the UK this year. Start planning those picnics! Please use this thread to add any dates for airshows and events coming up in your area for 2007

May 20 Duxford Cambridgeshire. May Air Show.

June 17 Central London. 25th Anniversary of the Falklands War.*** This should see the return to the skies of a Vulcan Bomber!!***

Restarted modelling in late 2005 after a break of over 20 years.Built a lot of armour as a teenager but now concentrating on WW2 aircraft. Some skills are coming straight back to me and Im learning new ones everytime I log on to this site it seems.

Bigskip
me thinks an Aeroscale day out should be arranged - any takers for a meet at one of the shows? Duxford on the 7th July sound good to anyone? Andy
MAR 20, 2007 - 04:27 AM

drabslab
What a splendid initiative to put this on-line. I remember my first visit to Fairford many years ago. It had been a month in Belgium of very high temperatures and yes, clear blue sky. When crossing the channel it started to rain. It stopped raining 5 days later, while we were crossing the channel again, going back to Belgium. :-) During those 5 days, we have been sleeping (with 5 people) in our car, because the camping area had been turned into a swamp. At the airshow, the Red arrows did not perform, just did a few low level flights, the bookstores in the many tents were closed becasue books could not stand the water,... It looked more like a swimming pool conference than an airshow all togehter Still, we had a great time
MAR 20, 2007 - 02:42 PM

Tomcat31
Camogirl and I will be there on the Sunday of that weekend so that at least three of us for a meet to start off with.
MAR 20, 2007 - 06:51 PM
Go to Forum Topic
Copyright ©2021 by Nigel. Images also by copyright holder unless otherwise noted. The views and opinions expressed herein are solely the views and opinions of the authors and/or contributors to this Web site and do not necessarily represent the views and/or opinions of AeroScale, KitMaker Network, or Silver Star Enterrpises. Images also by copyright holder unless otherwise noted. Opinions expressed are those of the author(s) and not necessarily those of AeroScale. All rights reserved. Originally published on: 2007-03-20 00:00:00. Unique Reads: 9420