The Vultee BT-13 Valiant was an American basic trainer aircraft built by Vultee Aircraft for the United States Army Air Corps, and later US Army Air Forces and was the basic trainer flown by most American pilots during World War II. It was the second phase of the three phase training program for pilots. After primary training in PT-13, PT-17, or PT-19 trainers, the student pilot moved to the more complex Vultee for basic flight training. The BT-13 had a more powerful engine and was faster and heavier than the primary trainer. It required the student pilot to use two way radio communications with the ground and to operate landing flaps and a two-position Hamilton Standard variable pitch propeller. It did not, however, have retractable landing gear nor a hydraulic system. The large flaps are operated by a crank-and-cable system. The prominent pitot boom would buffet strongly when the aircraft was just about to stall, shaking the entire airframe. This characteristic gave rise to the aircraft's affectionate nickname: the "Vultee Vibrator." An identical version for the US Navy was known as the SNV and was used to train naval aviators for the US Navy and its sister services, the US Marine Corps and US Coast Guard. (Source: Wikipedia)

This is the 1:48 scale Vultee SNV-1 Valiant (Navy version of the BT-13) from Planet Models built almost from the box except for smaller details (see text below). An in-box review of this kit was previously published on Aeroscale.

Building the cockpit interior of the kit was pretty straightforward. There are no photo etched parts so all the details on the instrument panels must be painted with a brush. One sure gets used to these pre-colored PE instrument panels from Eduard so for this build it was a "back to the roots" experience. The seat belts are molded on the two resin seats and here as well some careful painting is required, but in the end the result looks acceptable. The rudder pedals are a little on the thick side but fortunately they are not very visible behind the instrument panels. The internal tubular structure of the aircraft is molded directly on the fuselage halves while some more is present on the bulkheads as well as a complete rollover structure behind the pilot seat. The overall level of detail in this area was good enough for me and I decided not to add any more. What you see in the accompanying construction pictures is what you get in the box. I have decided to paint the interior as per instructions and also because I knew the Interior Green color and the aluminum finish of the exterior would make a nice contrast. However I could imagine that the interior could have been silver as well.

After the cockpit was completed, the fuselage halves were brought together. It was a tight fit with the interior sub-assembly but in the end all worked well. The one piece wing part was glued next with the help of a good amount of CA glue. Fit was not perfect but with some trimming not bad at all. The rudder was then installed as well as the horizontal tailplanes. These have no locators so one must be very careful with alignment. Some filler was needed in some areas but not more than on a short run kit. I have added a fairing at the base of the rudder though, as it was missing on the kit. For this I have used Tamiya's two part epoxy putty. This product is excellent for this kind of build since it adheres very well on resin and it can be sculpted. In some places I have also used it as a filler. On the pictures it is the lighter one while the grey areas are the normal Tamiya basic type putty.

Since I decided to do the colorful Yellow/Silver Navy scheme, I had to face my demons: aluminum finishes. I have tried several type of paints in the past in the hope to find something suitable for me with no luck so far. For this project I have used the Gunze Super Metallic range of paint. First I have primed the model with Mr Resin Surfacer (Gunze as well) and then sprayed various shades of silver (SM01 Super Fine Silver, SM03 Super Iron, SM06 Chrome Silver and SM08 Plate Silver) on the model to achieve a "patchy" appearance. The latter isn't only an artistic effect but something very visible on period photos. To my surprise, everything went smoothly and it was even possible to use masking tape without damaging the paint. Icing on the cake is that the paint accepts coats of Klir varnish (Future) ungrudgingly which is a big plus for me since I always use it on my models before applying the decals and then a wash to enhance the panel lines. So, finally, I may have found the silver paint which works best for me after more than ten years of model building.

The most difficult part of the build was to fit the clear parts. These are vacuformed and don't fit very well. I decided to cut the greenhouse in five pieces (One spare is provided in the kit so this is possible) to make things easier and glued the windscreen and rear part before painting. This allowed me to blend the parts to the fuselage using Tamiya's epoxy and basic type putties. The movable parts were fitted at the very end. For the landing lights covers I have found a more radical solution: instead of trying to fit the vacuformed parts over the openings in the leading edges of the wing, I have simply covered them with transparent tape cut to shape.

The engine cowling was also modified a little for more realism. The last parts to be glued were the resin pitot tube and the extreme fragile landing gear legs. The latter are in metal and quite strong but unfortunately the locators are too short to achieve a strong bonding into the small holes present on the underside of the wing. Definitely a weak point.

Planet Models' 1:48 scale SNV-1 Valiant is a kit which can be built into a nice replica of the original aircraft. While the vacuformed canopy constitutes a real challenge, the quality of the resin parts makes it a not too difficult build in the end. So if you want to add this important U.S. training machine to your collection of quarter inch scale models, you know now where to search as it is the only game in town in 1:48!

Merlin
Hi Jean-Luc Beautiful job! I haven't managed to buy the "Super Metallics" yet in the UK, but I've also been very impressed by Gunze's standard "Mr Metal" paints. All the best Rowan
MAY 18, 2013 - 06:56 PM 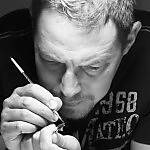 magnusf
OK, you've done it again. And this time with an all-resin model in yellow and silver, not the world's most forgiving finish! Beautiful as usual! Magnus
MAY 18, 2013 - 08:48 PM

Joel_W
Jean-Luc, just an outstanding build. Your cockpit & instrument panels came out perfect. And your NBF looks like metal, not paint. Well done. Joel
JUL 13, 2013 - 09:47 AM
Go to Forum Topic
Copyright ©2021 by Jean-Luc Formery. Images also by copyright holder unless otherwise noted. The views and opinions expressed herein are solely the views and opinions of the authors and/or contributors to this Web site and do not necessarily represent the views and/or opinions of AeroScale, KitMaker Network, or Silver Star Enterrpises. Images also by copyright holder unless otherwise noted. Opinions expressed are those of the author(s) and not necessarily those of AeroScale. All rights reserved. Originally published on: 2013-05-18 01:26:48. Unique Reads: 11889