by Bill Cross
6
Comments
While everyone who visits Washington, DC goes to the Smithsonian's Air & Space Museum to see its iconic aircraft like the Wright Brothers' flier or the Spirit of St. Louis, the REAL stuff is out next to Dulles Airport in Chantilly, VA at the Steven F. Udvar-Hazy Center. Mr. Udvar-Hazy wanted to thank the United States for the opportunities he had when he immigrated to the US from Hungary in 1958 during the uprising against the Soviet Union. Prior to his gift for this facility, much of the Smithsonian's collection of aircraft like the Enola Gay were stored out-of-sight of the public.

The result is a marvelous facility in the shape of a "T." In the main long hall are hundreds of planes, jets, missiles, helicopters and engines, while the shorter hall has the Space Shuttle Discovery, all of the various models of space capsule used by the US, plus a host of missiles.

I recently traveled to Washington to visit my father's grave at Arlington National Cemetery, and took along my son. We spent a delightful afternoon inside the facility seeing just about every major plane you can name, along with many obscure ones I have never heard of. In addition, the museum has a restoration facility that you can see from behind a glassed portico, as well as items like an ME-163 Komet and a Heinkel HE-219 Uhu that are in the process of being put back together.

The highlights of the exhibition are clearly the Enola Gay, the plane that dropped the first atomic bomb. The aircraft is controversial in its own right, and attempts to "curate" it have largely met with criticism over the very act of the United States dropping The Bomb. The understated display simply shows the bomber in all its magnificent enormity. Other highlights include a Concorde, a Boeing 707 (the first really significant commercial jetliner), a pristine F-4U Corsair, a P-40, and the new F-22 Raptor.

I apologize for the poor quality of some images. The museum's lighting is dark on a good day, and it was overcast and rainy the day of my visit.

Self-proclaimed rivet counter who gleefully builds tanks, planes and has three subs in the stash. 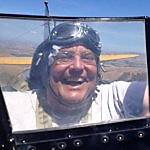 dommy20
I wonder, on the 219 the portion of paint at the wing root, is that original paint? If it is original, it is an interesting example of what the scheme is supposed to look like vs the newer restoration paint job. More significantly, it would be an illustration of how the paint was originally applied before final assembly! I think that itself is quite intriguing, and it would mean that on our models that the wings should not necessarily match the fuselage, as they may have been painted separately. Of course, this only means something if the paint is original.
OCT 05, 2014 - 07:05 PM

Aurora-7
This is great! 495 images! I literally missed getting to there when I was in DC a couple years ago due to a family issue. These are B-26 cowlings, if I'm not mistaken -my favorite of the 'twins'. I suspect they're part of the full restoration of 'Flak Bait' which I believe was planned to be fully restored (as opposed to just her nose section in the NASM) and display at Udvar-Hazy. LINK
OCT 20, 2014 - 04:08 AM
Go to Forum Topic
Copyright ©2021 by Bill Cross. Images also by copyright holder unless otherwise noted. The views and opinions expressed herein are solely the views and opinions of the authors and/or contributors to this Web site and do not necessarily represent the views and/or opinions of AeroScale, KitMaker Network, or Silver Star Enterrpises. Images also by copyright holder unless otherwise noted. Opinions expressed are those of the author(s) and not necessarily those of AeroScale. All rights reserved. Originally published on: 2014-10-04 03:08:45. Unique Reads: 22577