WWW
magnusf (Magnus Fridsell) said
I have yet to start this one for the Twin Spinners Campaign but I have enough material to at least show you the specifications...

The kit is a Smer release of the very old Heller one (the only game in town even if Azur has had one listed for future release for some time). A simple and rather coarse kit that will require some work!

Boxart (my scan looks better than the box, which looks as if someone has sat on it...):

As can be seen, this one needs an upgrade! The following parts will be used!

And then this VERY sexy set of multimedia: 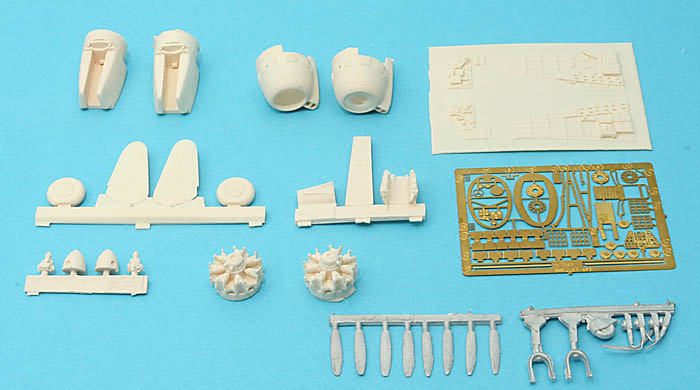 This set is from French HiTech-models who in later years have made quite a few full kits. This one is from around 1995 I think, I bought it at Telford for next to nothing many years ago, the original prices for the HiTech sets were rather high. Modelling has come a long way in the last decade and a half, noone makes this kind of things anymore. Especially not for the kits that really need them!

And finally the all-important documentation. The Br 693 has always been a favourite with me so I have been collecting! Even if easily accessible information is rather thin on the ground there is at least some:

I haven't really decided how to finish it. There are two options for me: French from May 1940 or Vichy. The Vichy ones are colourful with their yellow-and-red striped tails and engines, on the other hand May 1940 was the heyday for the machine that was really quite effective even if it took horrible losses. We'll see! The kit decals are useless but I have a ModelArt sheet and somewhere I think I have a Carpena sheet as well!

I think this will be an exciting one!

Press banner to the right to follow my trail to the new forums!

PROFILE
Yeti123 (Taylor Neely) said
Magnus:
WOW. This is going to be be a very in depth project. White metal, resin, and vacu-form canopies. I can't wait to see this one done. Vichy scheme would definitely be an eye catcher.