I just finished my Fw 190 F-8. It is mainly out of the box, I just added steel tubing for the wing root guns, CMK wheels to replace the much too small Tamiya parts, Eduard seat belts and HAD decals for Egon Thiem's machine as Gruppenkommandeur of I./SG10 in Hungary February 1945. Sadly I could not find any additional info on that machine. Mr. Szegedi(HAD) answered that this was based on pictures, but that he no longer has them ... if anyone has further info, please share them here or shoot me a PM or email.

Some in progress pix were already posted in the Focke Wulf 190 Campaign thread, but to complete the picture I post them again here: 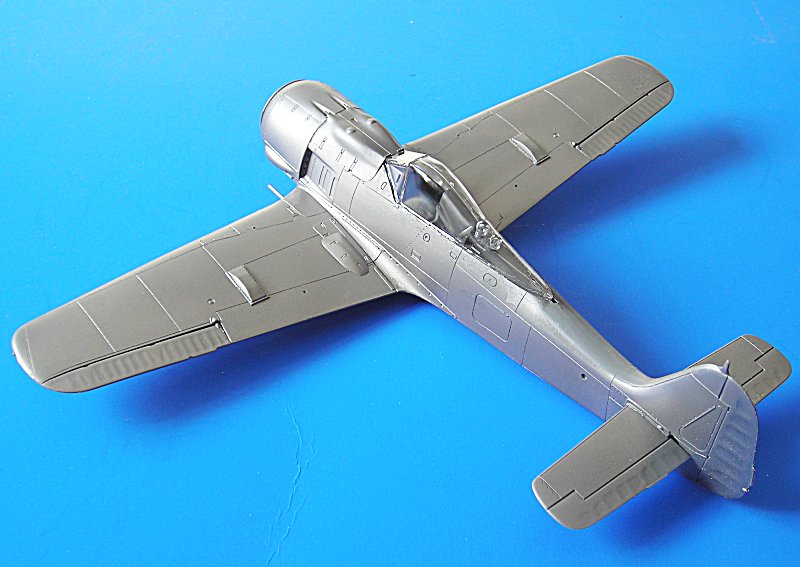 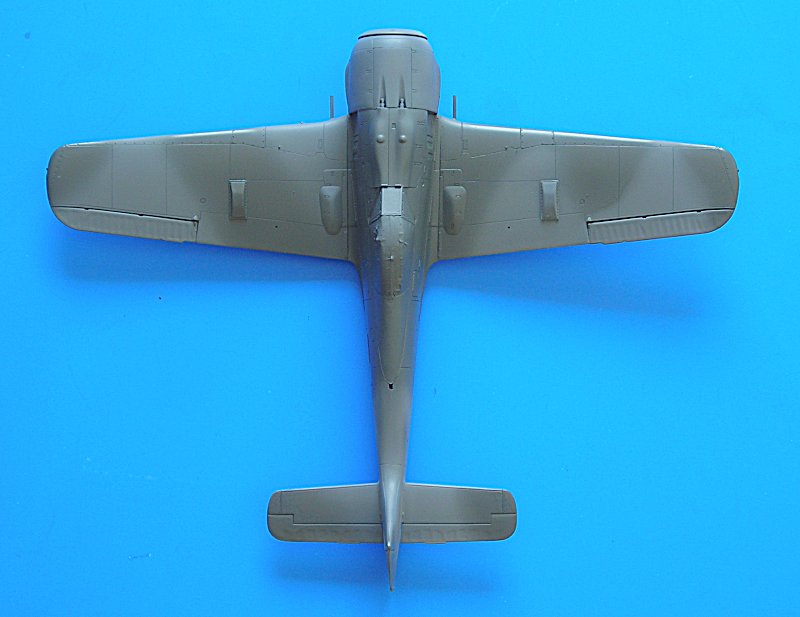 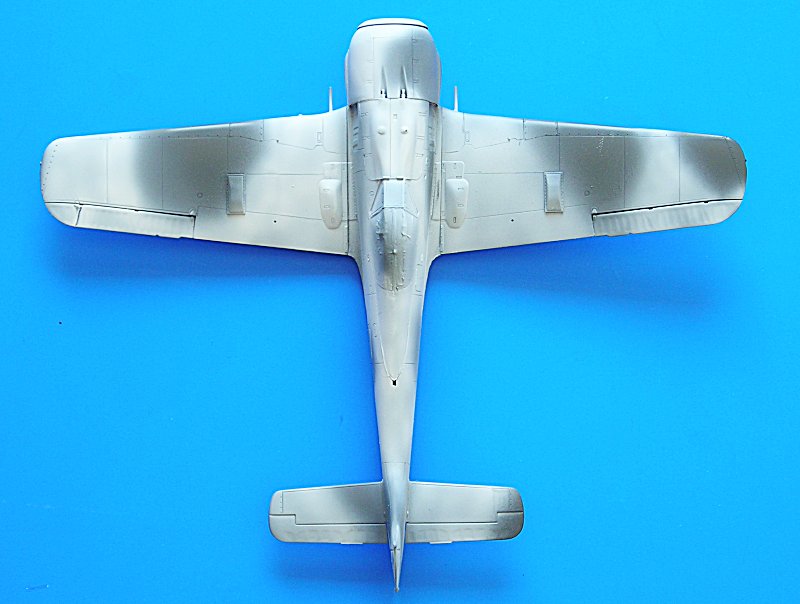 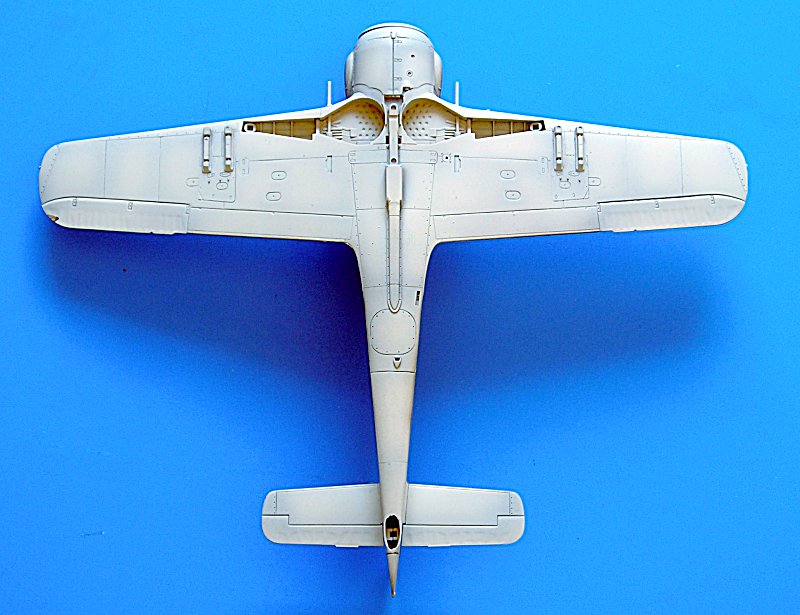 Her is a photo after the first decal session in which I added most of the larger markings. 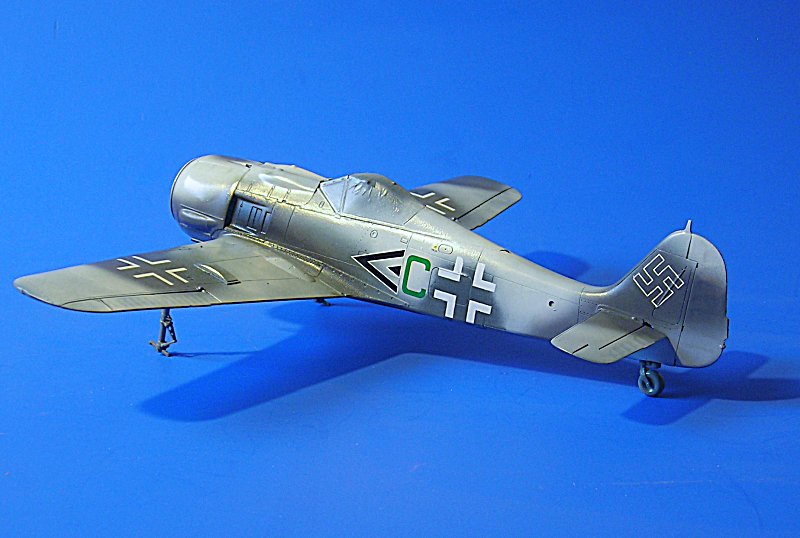 Now I added all the small stencils that you do not really see, but would miss if they were not on the model. After that I gave it another Klear coat. I added the cooling fan + prop assembly and the u/c covers. the wheels are from CMK .. a bit slim and still slightly too small in diameter for my taste, but waay better that the Tamiya stuff: 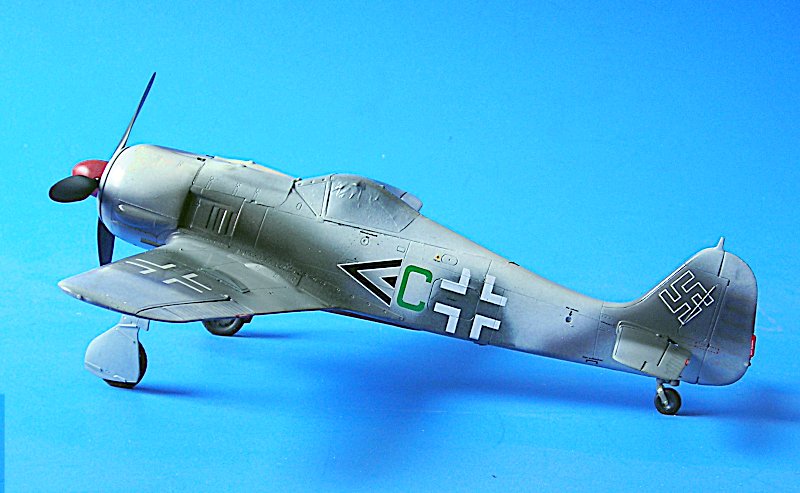 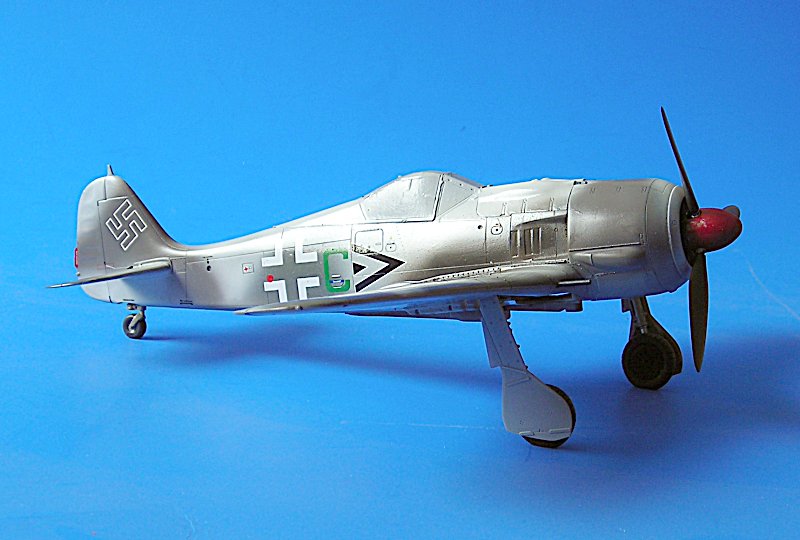 Now the washing session .. not much to tell about, but the model finally starts looking good .. at least in my opinion: 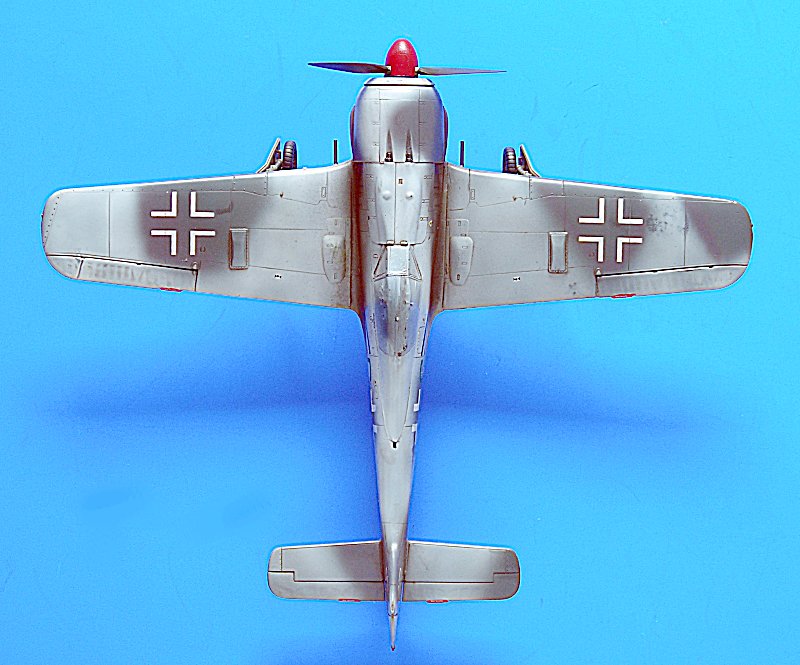 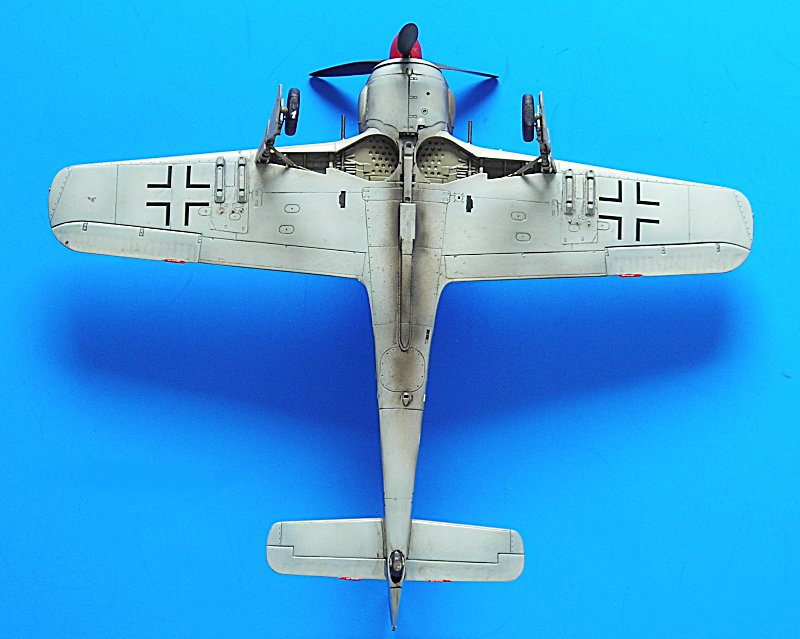 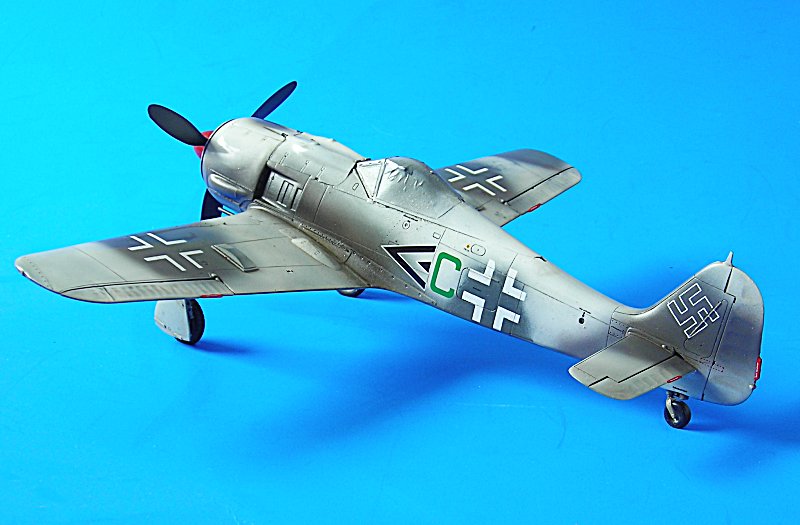 So here are the new pictures of the finished model. I added a flat coat and some dirt with pigments. I drilled a hole in the canopy and glued in smoke coloured sewing tread. The bomb loading cart is still wip ... I am just very, very bad at painting figures: 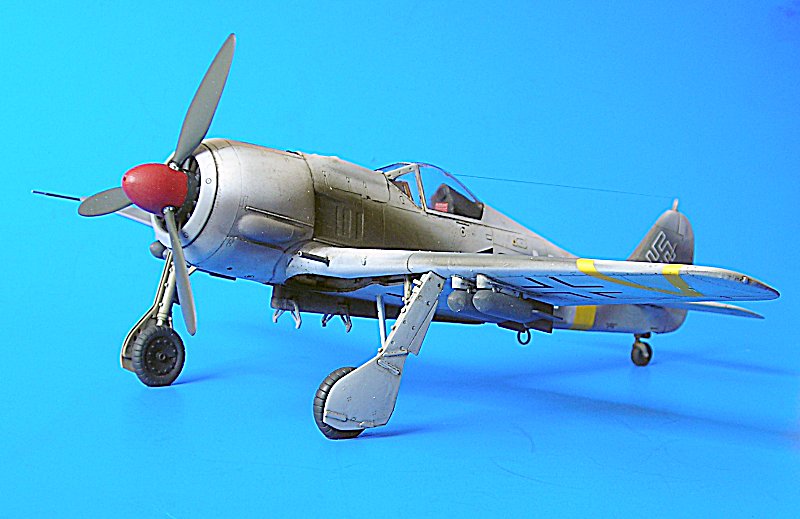 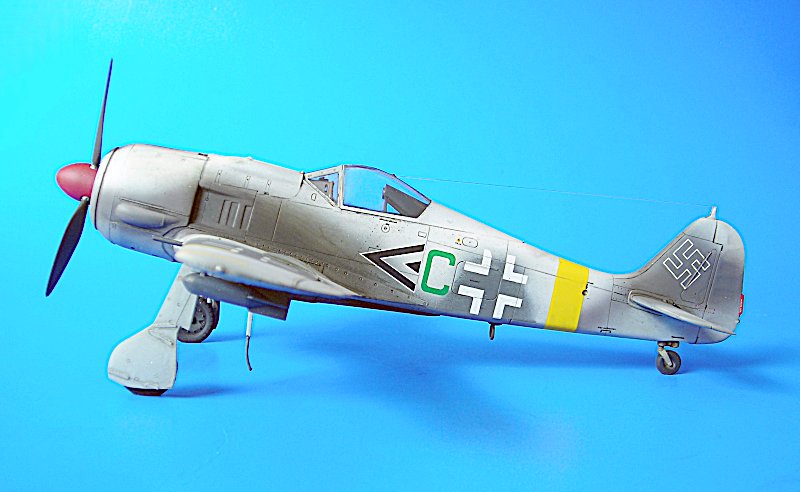 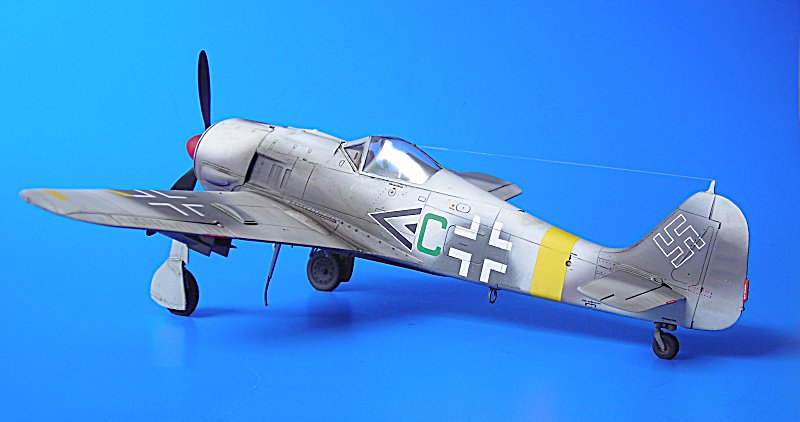 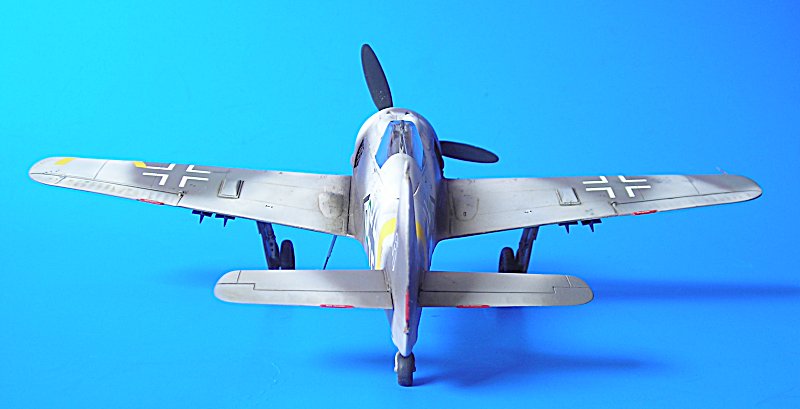 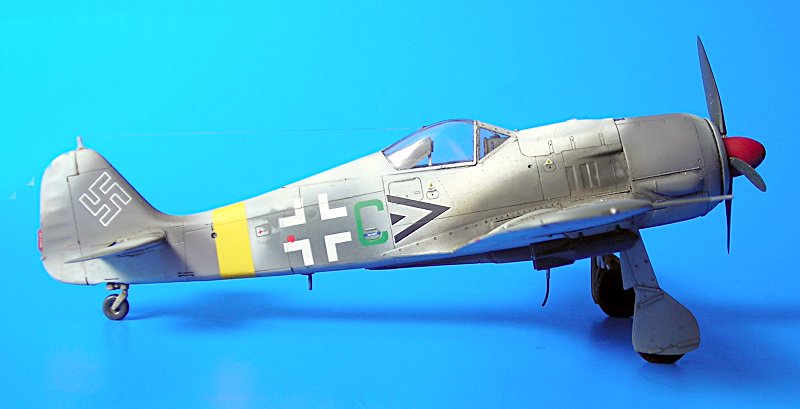 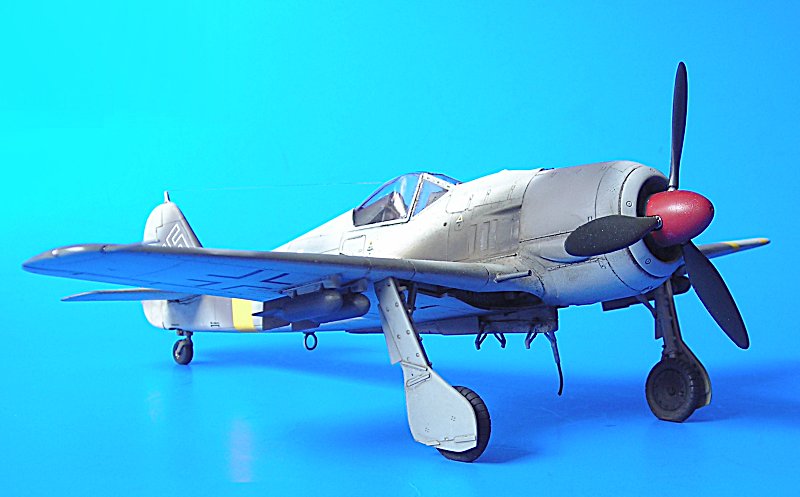 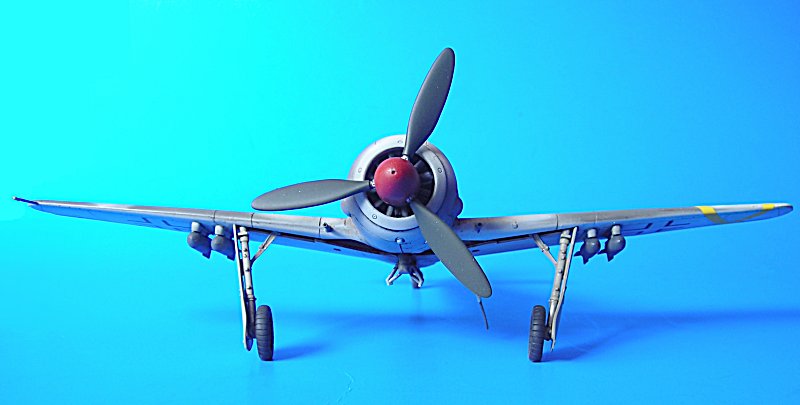 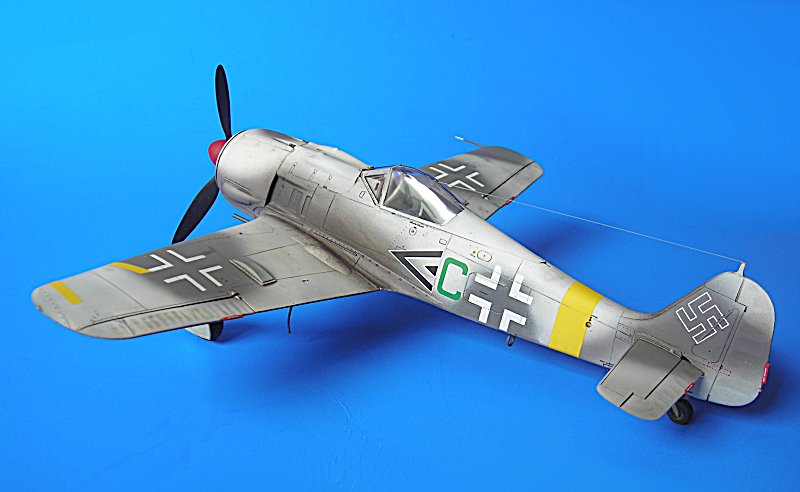 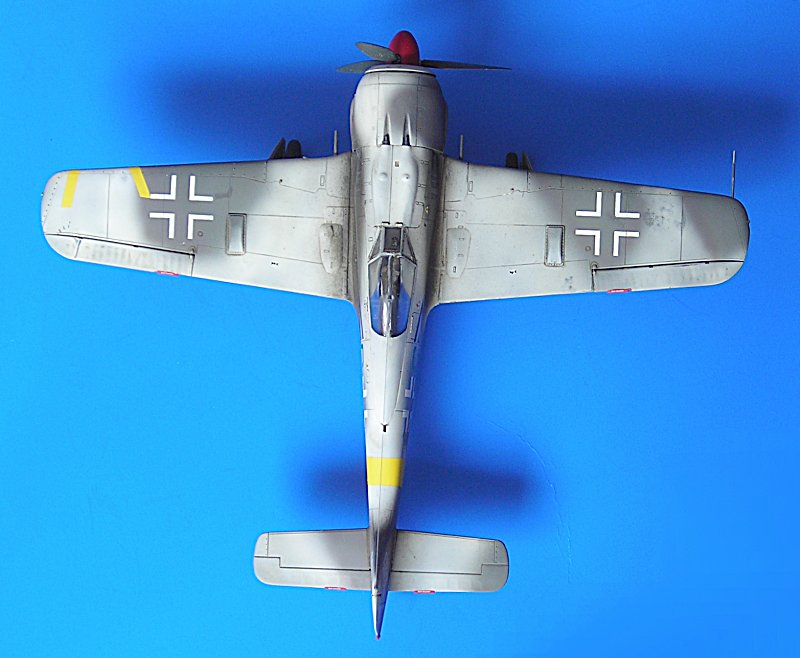 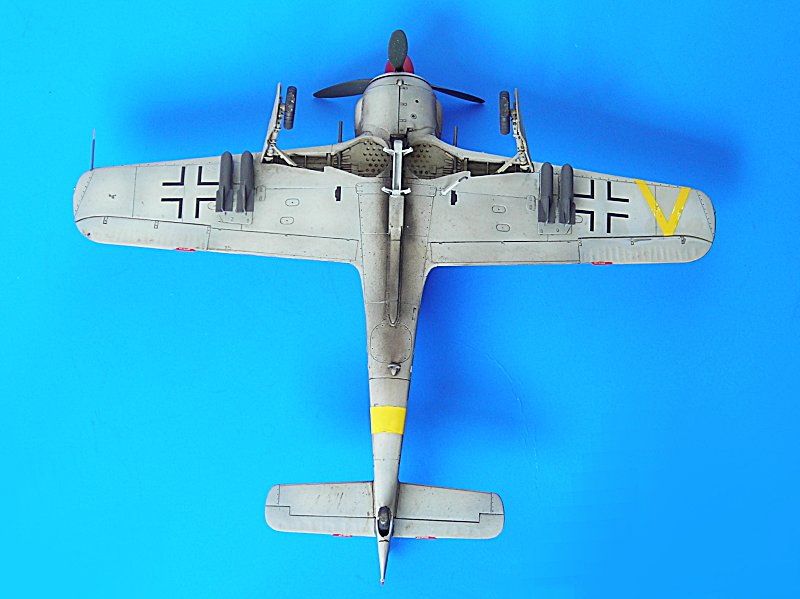 PROFILE
JimMrr (Jim McIntosh) said
Nice job on your canopy steffan ....Im impressed...what did you use for masking?
Im still waiting for my stuff for " Yellow 10" that I ordered before Christmas

so I can start my own FW....I really like the way yours turned out
Projects:
K44 Anti Tank gun
Diana
Albatros DIII

WWW
alpha_tango (Steffen Arndt) said
Many Thanks Terri and Jim!

I am pretty happy with the model, especially as I finished it in just a few weeks .. got it well after Nuremberg, and now it is finished .. it is like speed of light for me, and a good boost of motivation (I pushed the Bf 110E pretty far alongside)

@Jim: The masks are from Tamiya oob. Just have to be cut out .. prefer the precut eduard stuff .. but better than trying yourself with Tape. I had a bit of wash running under the tape and I liftet some of the paint on the thin stripe along the middle of the canopy. I repaired it with a little RLM 66.

greets from the North
Thomas

Carpe Diem ! Life can be so short !

@all: I have updated my first post with some further information about the construction

Which reminds me I must get my one finished too - it's so close to done, I shouldn't let other distractions get in the way (for once! LOL!). I'll try to have another crack at it this week.

It's great to see that you've added a new (finished) model to your collection. And it's indeed an excellent one! Congratulations!

I'm looking forward to see it in flesh one day. Maybe during a meeting at Marc's headquarter?

@Rowan: I thought you had already done it !? ... also see my Eduard A-8 thread that you "cowardly" avoided to check

@Jean-Luc: yes, that would be nice. Problem is my time schedule at the moment. I will check it tomorrow, maybe there is some room on the 21.05 (depending on when my course finishes) or we meet at a weekend, but I think that would interfere with "family business"

@Mike: I like the scheme too, but it might be that it is fiction. I have a discussion running on LEMB about it .. maybe I will add some theatre markings .. OTOH I am pretty lazy, so until a picture comes up I will probably not do it .. I wanted to finish a model, so I broke my rule that I do no model without at least one pic of it (there is still enough room for fiction and artistic license)

I was wondering, where do you get the steel tubing for the guns and what do you use to cut it? Looks good. I'm working on the Tamiya Fw 190 A8 for the Butcher Bird campaign. My build will be OOB with some AreoMaster decals for Oberst Walter Dahl, Stab/JG 300.

I use hypodermic needles and I cut them with a cutting disk in my motor tool.

BTW I am about to finish my model again ... comes quite often recently. Some guys over at LEMB convinced me, that this crate would most probably have theatre markings (yellow fuselage band and "V"), if it is real at all. It is possible or even likely that it is bogus ... otoh the staff of HAD wrote me that it was based on pix ... make your own decision ... whatever is true, I still like the model.

I bumped this thread to show my improved Fw 190 F-8. I was convinced that this crate should have theatre markings and to make it at least a bit more possible - I am not talking of accuracy as I totally lack references for this special aircraft - I decided to add them. As I did not want a total makeover I just added the decals from the Tamiya kit. This worked out quite well (using Klear as a setting medium), but the "V" was too short on the upper wing. Luckily Rowan did not need his decals and sent me the spares ... thanks again, mate!!!

No need to repeat the pix here I just replaced them on the server, see post above for the new pix.

My visit to Marc (Mark58) also brought me a bit (actually quite a bit) of his "snow flour" whih I wanted to use for a small base I build for this model. It is not yet finished, as the logs are too brown to my eye so I will add some greys and greens here to make them look a bit mor natural. the 2nd figure from the kit also has to be completed (painting) 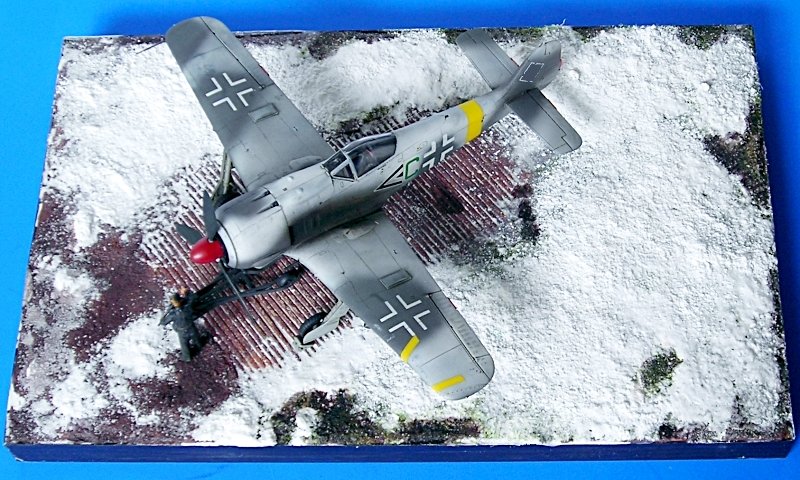 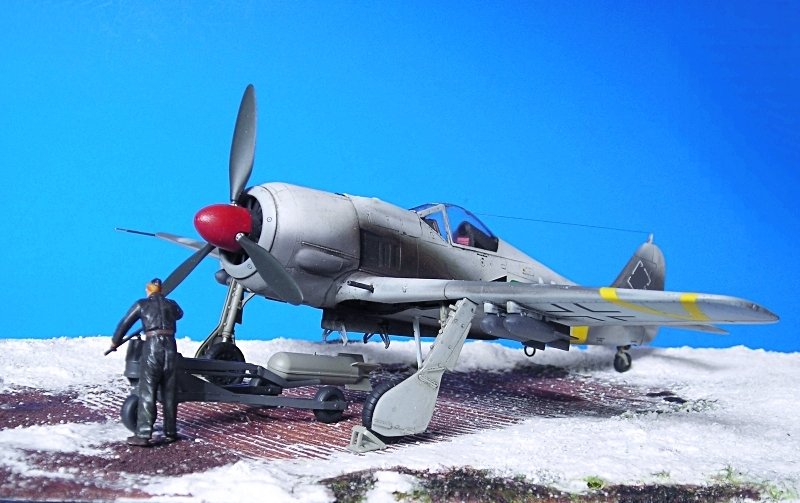 WWW
alpha_tango (Steffen Arndt) said
and a bit of fun ... 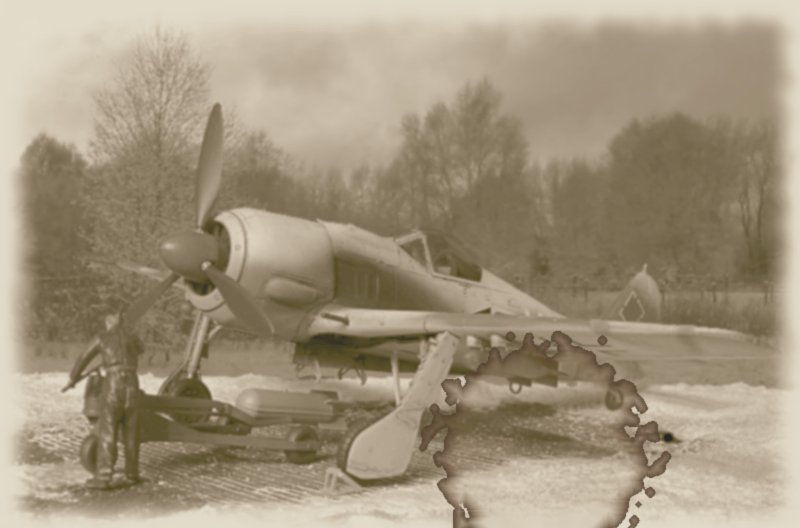 Steffen
P.S. ... name the colour of the spinner

this one is gorgeous...

this one is gorgeous...

That's right! And the B&W picture is a very nice touch as well...

this one was already finished in May. I am just working on the base and the figures ...

J-L Well, as you have seen it in person .. it is probably not bad but also nothing special..