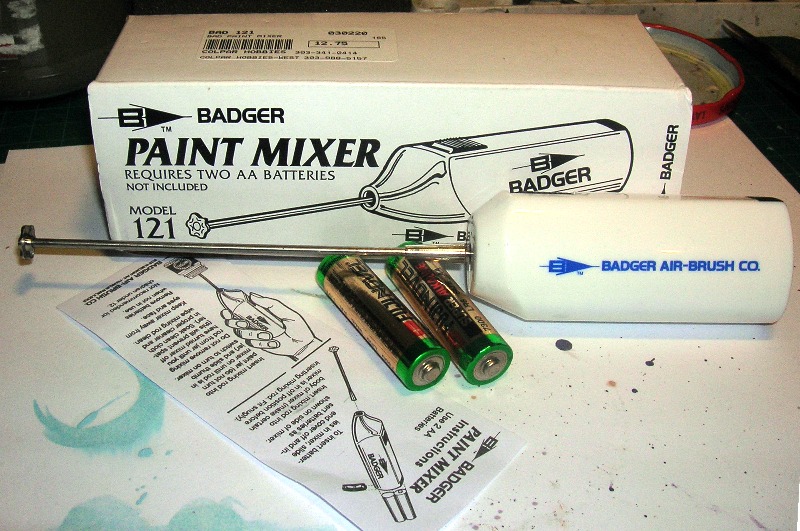 I can remember hearing the name "Badger" as far back as 1969. It was formed from the Parent company "Thayer - Chandler". I actually have one of their first air-brushes that I rec''d from an long time friend Paul Linger. This item under review is more than a luxury to the dedicated modeler. . .
We all know that over time hobby paints tend to separate into pigment and carrier. This handy little mixer thoroughly blends all types of paint.

I've got one and use it all of the time. Great product.

PROFILE
Grumpyoldman (Dave O'Meara ) said
I've been using one for several years now.
It's managed to restore paints that I thought were beyond hope of ever using again.

I've found that two new batteries make it spin too fast to my liking, so I use two weaker batteries from my pen light flashlight when it starts going dim.

Character is what you do when no one is looking.
Few things are harder to put up with than a good example.- Mark Twain
Make yourself an honest man, and then you may be sure that there is one less scoundrel in the world.--Thomas Carlyle

WWW
JackFlash (Stephen T. Lawson) said
Wow folks its a real pleasure when the owner of a hobby manufacturer writes in!

Thanks for the review on our paint mixer. Well done.

However, your openeing statement (below) is inaccurate. For the record allow me to please clarify in the short version how Badger came to be.

Thayer & Chandler never had any ownership or parent company stake in Badger Air-Brush Co. My Grandfather, August Schlotfeldt, and my father, Walter Schlotfeldt, owned and operated a Swiss screw machine company in Chicago that made airbrush parts for Thayer & Chandler, Paasche, and Wold airbrush. It is from this connection to the airbursh manufacturing world and my dad's realetd interest in better airbrush design that Badger came to be in 1964. My dad introduced teflon seals and free standing color cups (now and still used by all airbrush manufacturers today) to the airbrush industry with his initial airbrush designs, and it is from "small humble beginnings" related to those improvements, and selling them, that Badger came to be and grew into the largest airbrush manufacturer.

In this I stand happily corrected!