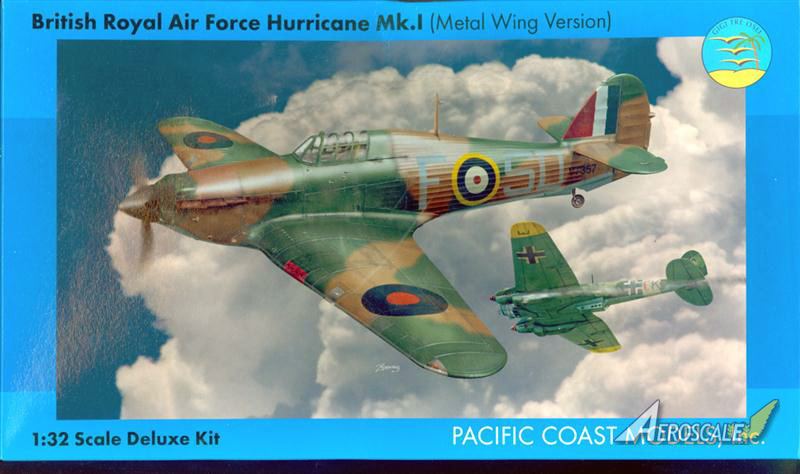 PROFILE
bill_c (Bill Cross) said
Thanks, Andy, for getting this one up & running.

Thanks, Andy, for getting this one up & running.

My pleasure Bill. Thank you for submitting it.
Andy

Different interpretations of instructions, revision and alteration of national markings, shortages of materials resulted in more variation in the camouflage and markings of RAF aircraft in 1940 than any other period. Manufactures continued to use the bright red and blue pre-war identification colours instead of the dull colours that replaced them with the introduction of camouflage. When new markings were applied both the bright and dull colours might be found on the same aircraft. When Sky was introduced throughout the RAF, circa June 1940, very little was available and mostly as a gloss finish that the Air Ministry did not want used. The tiny amount of Type S that had been produced was in the hands of the PRU. As a result, other similar colours and not so similar colours were used as substitutes. Archaeology (wreckage) has revealed that two in particular were used, BS 381 (1930) No 1 Sky Blue and BS 381 (1930) No 16 Eau-de-Nil but Sky Grey has also been found. Some units mixed their own versions complicating things still further. Sky proper does not become common until mid-September. Investigation of more wrecks from June/July is needed to give a better picture of events.

Following a meeting at the Air Ministry on 30th October to address fighter camouflage and markings, on 27th November day fighters were to have port wing painted Night (black) and spinners painted Sky and an 18 inch Sky band was to be painted around the rear fuselage. As units began to request supplies of paint to comply with the instructions, 3 MU Milton (where you got your from) signalled the RAE on 18th December to advise them that they had no Vocabulary of Stores reference number for Sky. The RAE was asked to inform 3 MU which shade of Sky, Blue or Grey was required. (i.e., was Sky Sky Blue or Sky Grey?). They then stated they were issuing Sky Blue. (NB The Sky Blue on the Air Ministry list is very different from the BS 381 Sky Blue). As a result contemporary photographs of aircraft often show a marked contrast between the under surface and the spinners and fuselage band painted with Sky Blue.

R4175 RF*R. This aircraft is depicted correctly with the A pattern camouflage. NB. 303 Squadron placed the squadron codes, RF, behind the roundel on the starboard side of the fuselage and in front on the port side. Rotol propeller with blunt spinner. It was photographed being examined after being shot up by a Bf 109E from I./JG 52 over Sevenoaks on 6th September. Frantiseks top scoring aircraft he was killed in it on 8th October.

P3700 RF*E. During September 1940 303 Squadron used three Hurricanes coded RF*E, P3700, P3577 and P3901. P3700 had the squadron badge under the cockpit, P3901 where it ws usually placed at this time, at the base of the aerial. The Hurricane is depicted in the A pattern which is correct for P3901 but not P3700 which wore the B pattern. So it is only necessary to move the squadron badge to correct it. According to some accounts P3901 bore the legend We do not beg for freedom, we fight for it under the cockpit. Rotol propeller and blunt spinner.

V7467 LE*D. Described in some publications as July 1940 and depicted without roundels on the under surfaces of the wings. (Roundels on the wing under surfaces were not introduced until 11th August 1940.) This Hurricane is illustrated correctly in the A pattern camouflage. Rotol propeller and blunt spinner.

V6864 DT*A. This scheme is post-BoB and certainly not October 1940 as painting the under surface of the port wing (Night) was not introduced until the end of November. Photographs of this Hurricane are found in the 257 Squadron winter wonderland set, North Weald, January 1941. Well past the BoB sell by date. This is a very well known aircraft and one wonders how anyone that knows what he is doing can attribute October 1940 to it. We have some very funny weather in this country but snow in October? Not really.

The B pattern camouflage is correct for this Hurricane. Under surfaces BS 381 (1930) No 1 Sky Blue (FS 595B 14325). Fuselage band Sky Blue (FS 595B 35550). Spinner also Sky Blue with red tip. Spinner base plate left in Night (black). Rotol propeller with blunt spinner. The serial number was repeated under the tailplanes in 2 inch characters in Night (black). This also very well known as they can be seen in the photographs.

There is no Sky on me!

PROFILE
bill_c (Bill Cross) said
Antoni, thank you for the very detailed analysis of the various aircraft in the PCM kit. Just for my own edification, where do you get your information? Thanks in advance.

All the best.
tim

I think the "exegencies of war" make getting it right that much harder. To a certain extent, we rely on the kit makers to give us informed options about markings and camo, but of course, they don't always put the effort in, or in this case, have offered schemes that are counter to the opinions of well-read parties.

I have the Zotz Hurricane decal sheet on order, and I debated last night cancelling it and leaving the plane with no underwing roundels. But it already has the Night on the port wing underside, so either I paint that portion Sky and leave the roundels off entirely, or go ahead with the PCM scheme and put the proper-sized roundels on. I am leaning towards the former actually.

PROFILE
bill_c (Bill Cross) said
The Zotz decals have arrived and I can either complete this kit with the "Night" half-painting per the kit or look at some alternative.
Bill Cross

PROFILE
bill_c (Bill Cross) said
I noticed that readers of this review have pretty much tailed off. I wanted to see if my not rating the kit with a number was seen as negative by anyone? When you see a review with no number, do you not read it or even assume the kit is so bad the reviewer didn't want to bother rating it?
Bill Cross

I noticed that readers of this review have pretty much tailed off. I wanted to see if my not rating the kit with a number was seen as negative by anyone? When you see a review with no number, do you not read it or even assume the kit is so bad the reviewer didn't want to bother rating it?

No, not at all Bill. For me personally much more important was your verbal description of the kit and building, highs and lows than the rating number itself.

PROFILE
bill_c (Bill Cross) said
Thanks, Michal. The editors of Armorama look at the whole question of giving a rating, trying to find out what serves everyone's interest the best.

BTW, it's a super kit that really builds up nicely, especially if you put the wings on the way I described.

PROFILE
kenner (Kenneth Casselman) said
I have to agree with Michal. I'm much more interested in the review itself (description, sprue shots, things to watch out for, etc) than in the rating. I would have thought that any decrease in the number of hits was largely a function of time.

PROFILE
MichaelSatin (Michael Satin) said
I'd like to comment on the camouflage pattern kerfuffle as well. When I first saw Tom Cleaver's review, I did a little research of my own and came to the conclusion that he's incorrect. I can't really comment on Antoni's post above that says that there was no protocol, but I did do some looking at pictures of Hurricanes where I could make out the camo pattern and the serial number and there does at least seem to be a correlation. Bottom line, it looks to me based on those photos and the odd/even-pattern A/pattern B convention that PCM and Richard Caruana got it right. I present the following evidence:

Here are some of the Caruana profiles from the PCM kit: 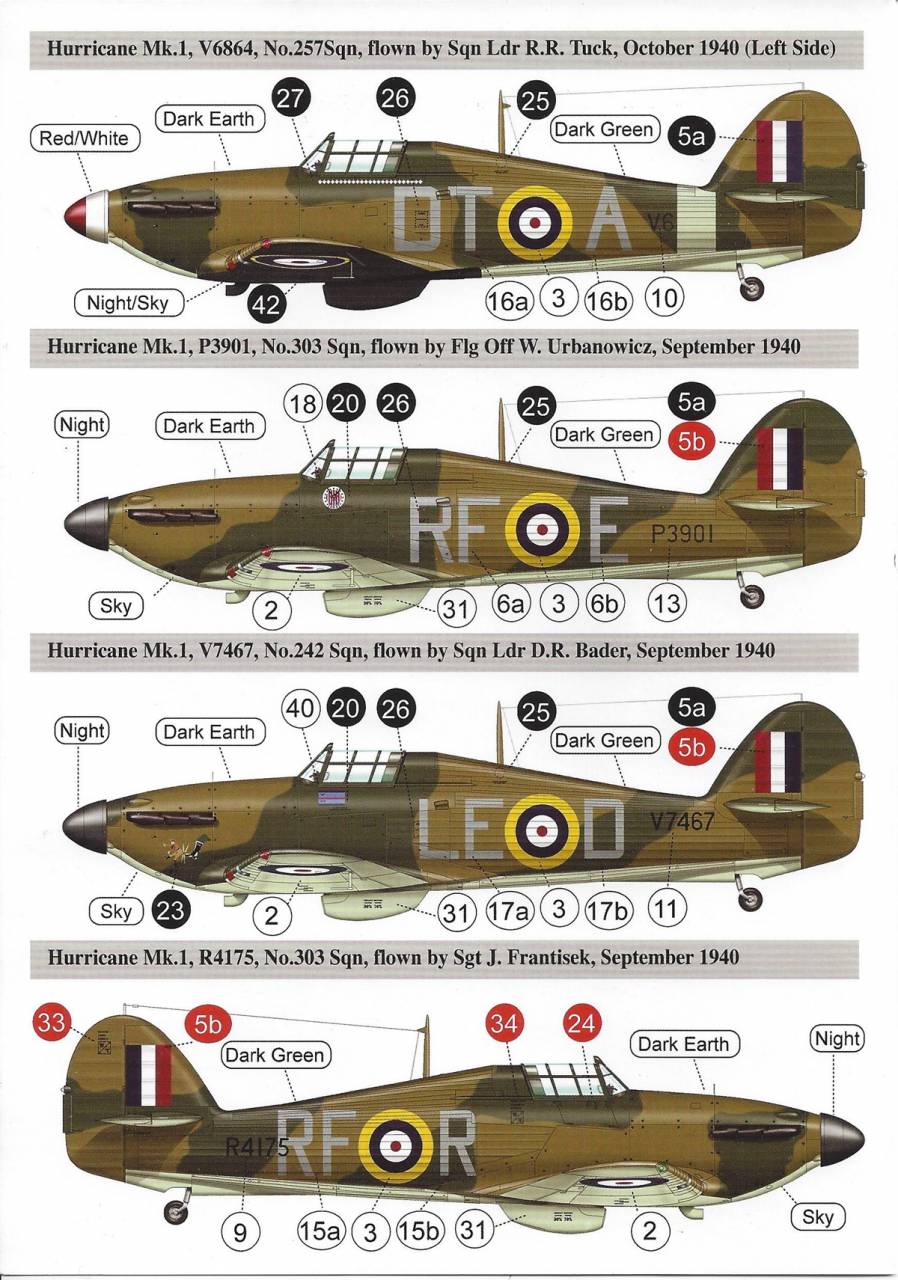 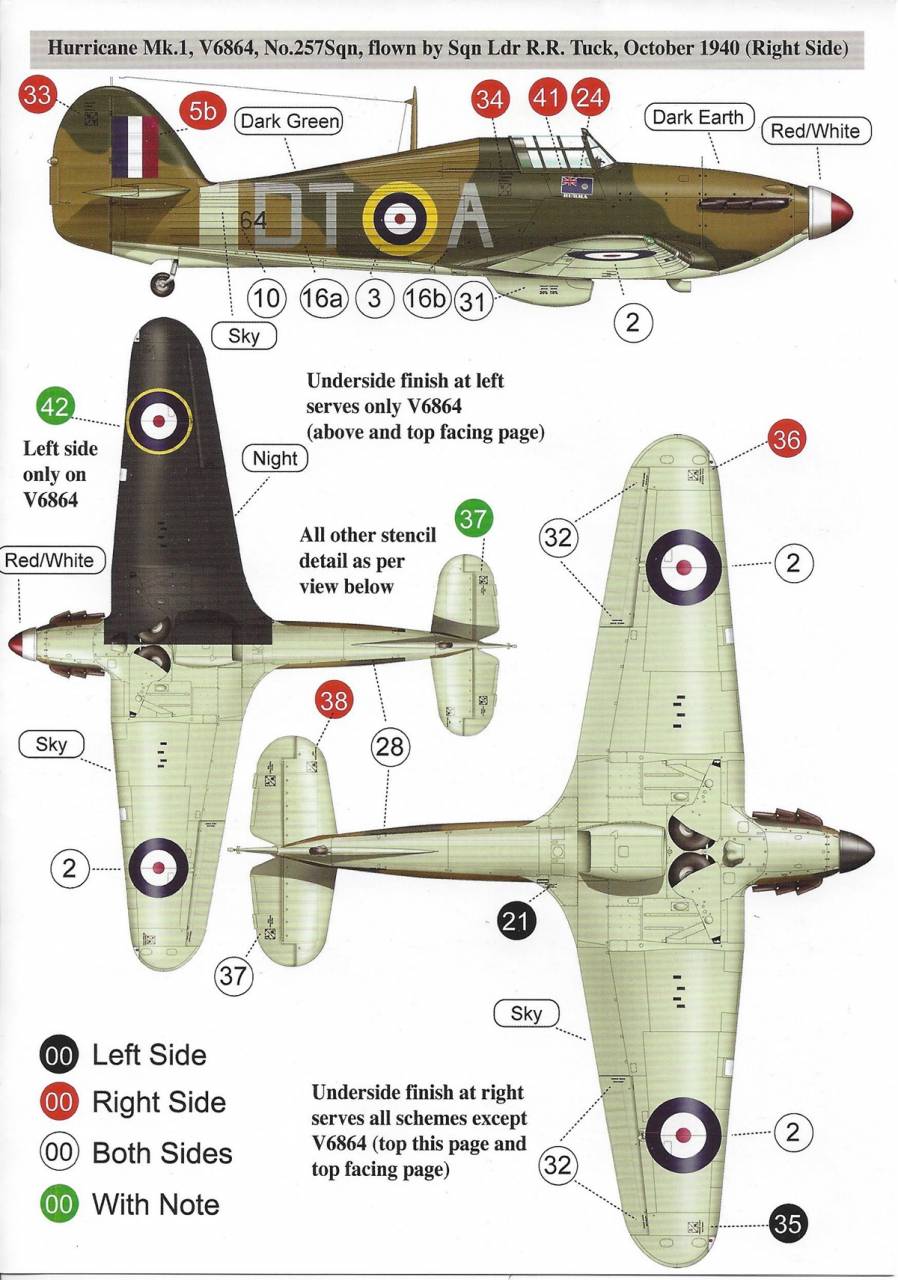 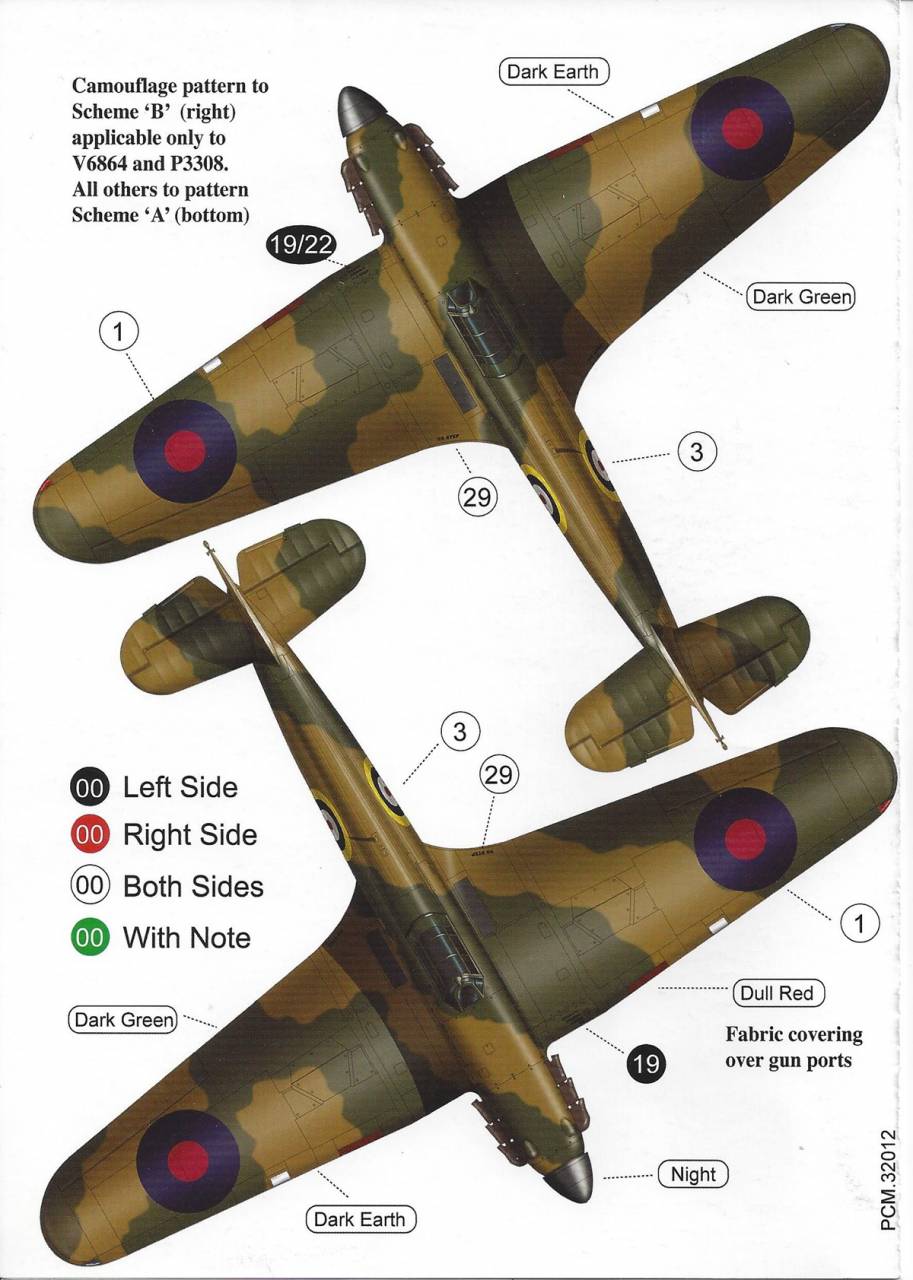 Here are photos of actual Hurricane I's from Osprey's Hurricane Aces 1939-40 (they are used here for informational reasons only). I'm assuming that the darker color in these black and white photos is dark green and the lighter color is dark earth, which I think is a fair assumption: 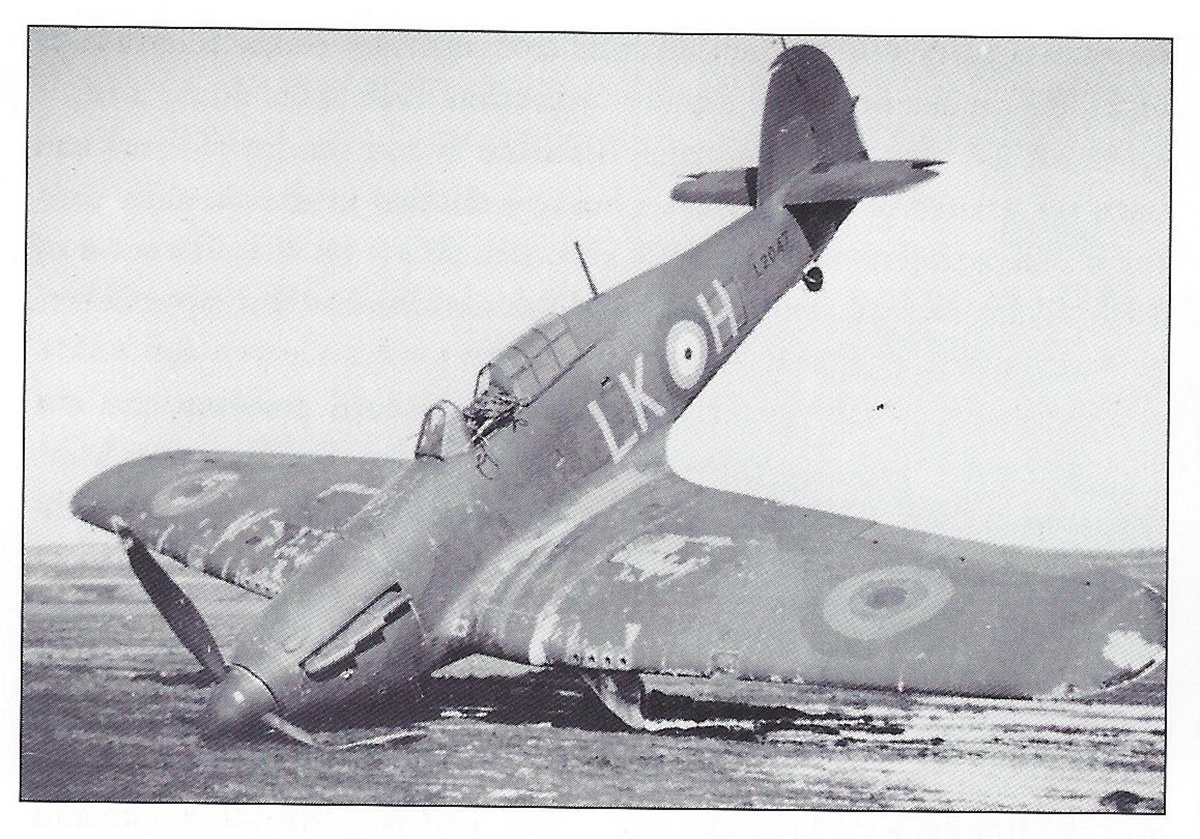 Compare to the odd serial numbered aircraft in the Carauna profiles, RFoE and LEoD as well as the lower plan view profile. Clearly the same scheme. Also see N2359: 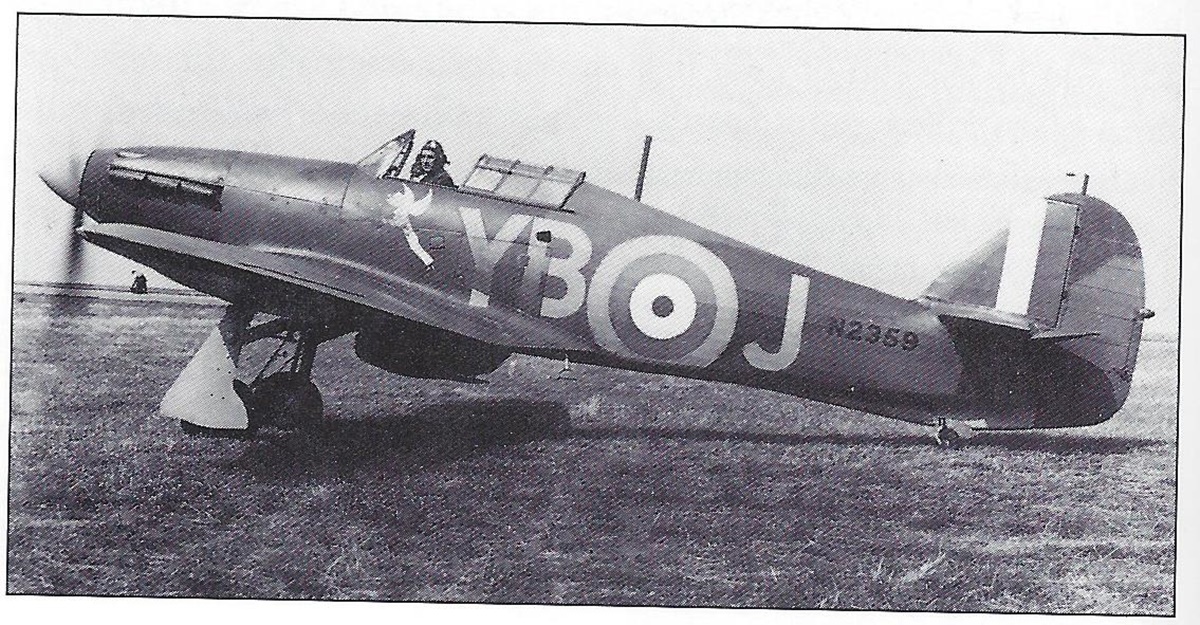 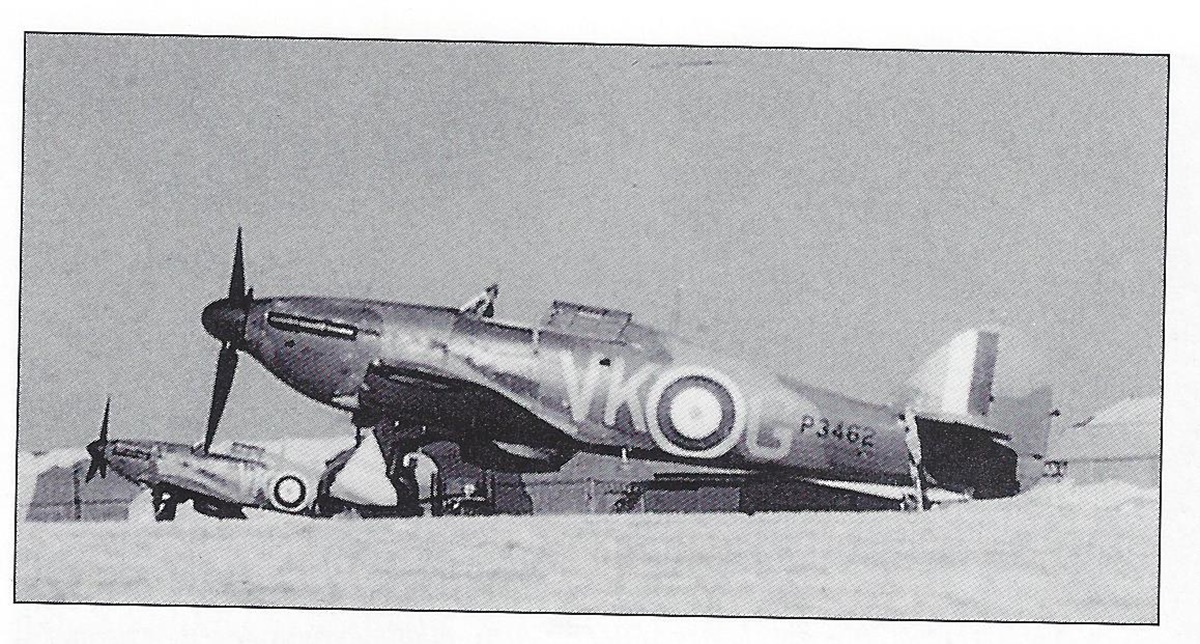 Compare to DToA in the Cauruana profiles. Again, same scheme.

Finally, the icing on the cake. I believe this is the photo Antoni refers to in his post:

Aside from some overpainting in front of the A that looks like it was field applied, this is obviously the same scheme as Caruana posits for this aircraft in his profiles (though I completely agree that it doesn't look like October to me!) Interestingly enough, Tom Cleaver says in his article that "... a famous photograph of Tuck's V6864, which shows the entire airplane..." proves his point that Caruana is wrong. Maybe we're looking at different photos.

Anyway, as far as I'm concerned, Caruana's profiles are correct as far as the camo schemes are concerned. I tried pointing this out to Mr. Cleaver some years ago, but he continues to disagree with me. That is, of course, his choice and he was very civil about it. But I just re-read the review here and I thought I'd lay this out for you all.

On the bench:
Sorta depends on your definition of "on the bench"...

PROFILE
bill_c (Bill Cross) said
Wow, eight years between posts is something of a record, Michael, but accuracy is always appreciated. Thanks for weighing in on this dispute.

Wow, eight years between posts is something of a record, Michael, but accuracy is always appreciated. Thanks for weighing in on this dispute.

I know Bill, I just couldn't help myself! I wanted to be sure anyone who read your review had the chance to get the whole story.

On the bench:
Sorta depends on your definition of "on the bench"...

Wow, eight years between posts is something of a record, Michael, but accuracy is always appreciated. Thanks for weighing in on this dispute.

I know Bill, I just couldn't help myself! I wanted to be sure anyone who read your review had the chance to get the whole story.

Unfortunately, PCM is out of business. I read somewhere another manufacturer was supposed to be picking up the molds (I think Sword made the originals with Eduard providing the PE and CMK the resin). I'd love to see them come back. Still have the Spitfire Mk XIV in the 'stash.
VR, Russ

PROFILE
bill_c (Bill Cross) said
Yes, there has been talk that PCM might return in some form. These kits still exist in the ether, and I recommend this one highly. Glad that we have clarified the camo situation. While not "definitive," I think for most modelers it's "close enough." Until we send someone back in time to the BoB, we'll likely never have an answer that settles this entirely. And since most modelers just want to have some solid guidance from the instructions and painting guide, it's nice to know this kit fills that role.
Bill Cross