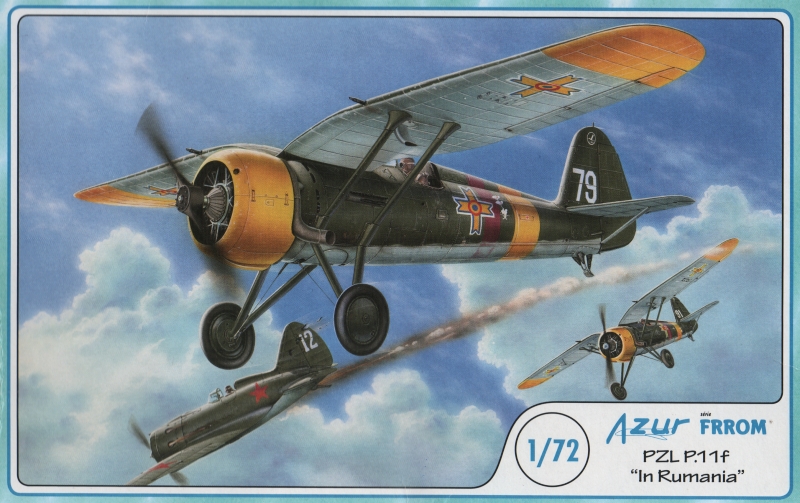 PROFILE
Antoni (Antoni Lachetta) said
I have two of these on the go, stalled as I pluck up the courage to install the final fiddly bits and the aerial wires. I also have one of the 11cs partly completed.

The exhaust outlet should end in the joint between the wing strut and undercarriage leg. I don't think this is possible on the kit however you fit the exhaust because the leading edge of the wing it the limit to how far back it will go. Looking at photographs it seems that the exhaust was not a curved pipe of constant circular cross-section but widened and flattened as it went around the port side.

The kit is basically the earlier P.24 with a new fuselage. This means the wings a not quite the same as those on the P.11. The P.24 could have two guns in the wings but the P.11 only one so there are extra panels line that cannot be filled because of the corrugations.

The outer hole in the leading edge needs to be filled. The instruction sheet places the blisters in the wrong place (the outer guns) but in the the correct position on the camouflage and markings drawings. Also on the box art. The blisters are handed, i.e., mirror images. This will give Gaston Marty an attack of the vapours as they should be identical.

There was no left and right machine gun so the cartridge exited from the same side. This does not matter on the p.11f as the blisters are covered over by the chutes.

The fuselage is the shape of P.11 but the cockpit, apart from the instrument panel, appears to be the same as the P.24. They failed to replace the rear bulkhead with one for the P.11 as the instructions tell you to Grind the shape of the fuselage bulkhead (part B10) to fit smoothly prior to mating the fuselage halves. Unfortunately this part was substituted during the mould preparation.

I have a better way of dealing with it. There was no bulkhead on the real thing and it does not have much of a useful function in the model. So I cut the headrest off and filed it down to fit and stuck it in position. The seat, when installed, covers the hole behind it completely. Thus an evenings filing and cursing is avoided.

The strap that secures the jettisonable fuel tank is not well moulded. I scraped it off and replaced it with a piece of a spare seat belt. Opportunity missed as I would rather have this included in the PE set instead of those tiny bits that everybody is frightened to use.

For the undercarriage I made a template from card using plans to set the right angle. I placed a drop of Bob Smith's finest thick CA on the attachment place on the fuselage, placed the leg at the correct angle and then applied a drop of kicker to set it instantly. This was done using my 'Dalek' method, that is, holding a brush between my teeth soaked with kicker. After the legs have set I added a little more CA to fill in the gaps. This has produced a surprising strong joint and I have not had any problems with the legs breaking off. There is a pimple where the wheel fits but no dimple on the back of the wheel for it to fit into. Therefore it is necessary to file away the pimple so the wheels can be glued on. Best to do this before attaching the legs. As the supporting struts were flat in section I used Microstrip for these instead of wire.

The resin skis are nicely cast but care is needed with the attachment brackets which are rather delicate and require a lot of flash to be cut out of the gaps. Fitting them is a little bit awkward as it is difficult to get them aligned so the aircraft sits perfectly. In the end I used one of those jigs for building biplanes to suspend the model at the correct height and then glued the skis to the legs. The instructions do not show exactly where the supporting cables are attached to the skis. You need to consult photographs to find out. Photographs show that this aircraft was not fitted with machine guns, wings and fuselage, or antenna wires.

Colours are only given as Gunze, not exactly easily obtainable for many. According to the book the colours were RLM 64/83 and RLM 65 possibly 76. Throughout the text the underside colour is described as light grey so I went for RLM 76 as that is a blue-grey colour. I used White Ensign Models RLM 83 and RLM 76. The yellow used on the decals is much lighter than that usually used (RLM 4). I found Humbrol 99 Lemon to be a good match.