PROFILE
charging_rhinos (Dustin) said
Hi everyone,
Happy new year to you all. It's been quite a long time since I've posted on kitmaker, and it feels good to be back! I've recently started a new build for a coworker. This is the first build I've done for another person I've done where I have been asked to replicate a very specific airframe and loadout.

My coworker's father was an A-7 pilot during Vietnam, stationed at Korat air base in Thailand. In late 1972,he was involved in a well-known mission to rescue two downed airmen. Arnie Clark was the leader (flying 71-970 which is now at the Wright Patterson museum). My coworker's father marked the locations for the smoke curtain drops with smoke rockets, then covered the helicopter as it picked up the pilots. The mission lasted nearly 9 hours, and was a success. He turns 80 years old next month, and this model (a replica of 71-354 that he flew in the mission) will be a surprise gift for him.

To aid in getting the model as accurate as possible I've had a wealth of information given me by my coworker. I have all the loadout and aircraft notes, photos, declassified mission maps, and I've even been allowed to listen to the actual radio transmission recordings of the mission. I've never had this level of reference information on a project before, and it is amazing. I'm so humbled and grateful for these great men who risked so much to bring two pilots home.

I'll be posting up a bunch of photos for your expert critique in the coming weeks. I am not an expert on the A-7 (I'm usually more of a modern aircraft kind of guy). So hopefully you all will be able to give me guidance along the way.

PROFILE
charging_rhinos (Dustin) said
A few quick shots. Per glowing recommendations, I purchased the Aires cockpit. I must say it is spectacular. 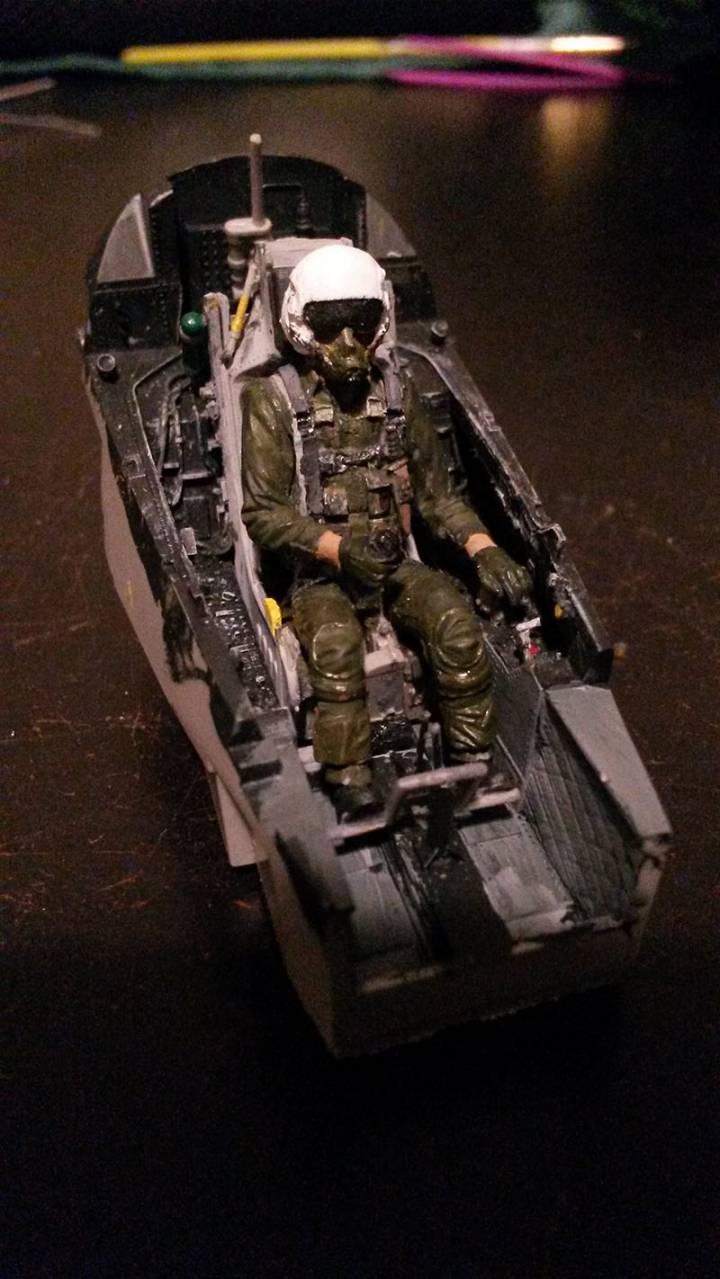 I also am, per the customer's request, adding in a pilot. I'm using the 1/32 Master Details USAF Vietnam pilot. Great resin casting, although the recommended paint FS numbers are not quite accurate for most Vietnam pilots. The G suits look sort of brownish tan in the included directions, but most were actually olive drab. Similarly, SLUF pilots' helmets were fairly quickly changed from white to OD in order to increase pilots' chances of not being spotted if they needed to eject. 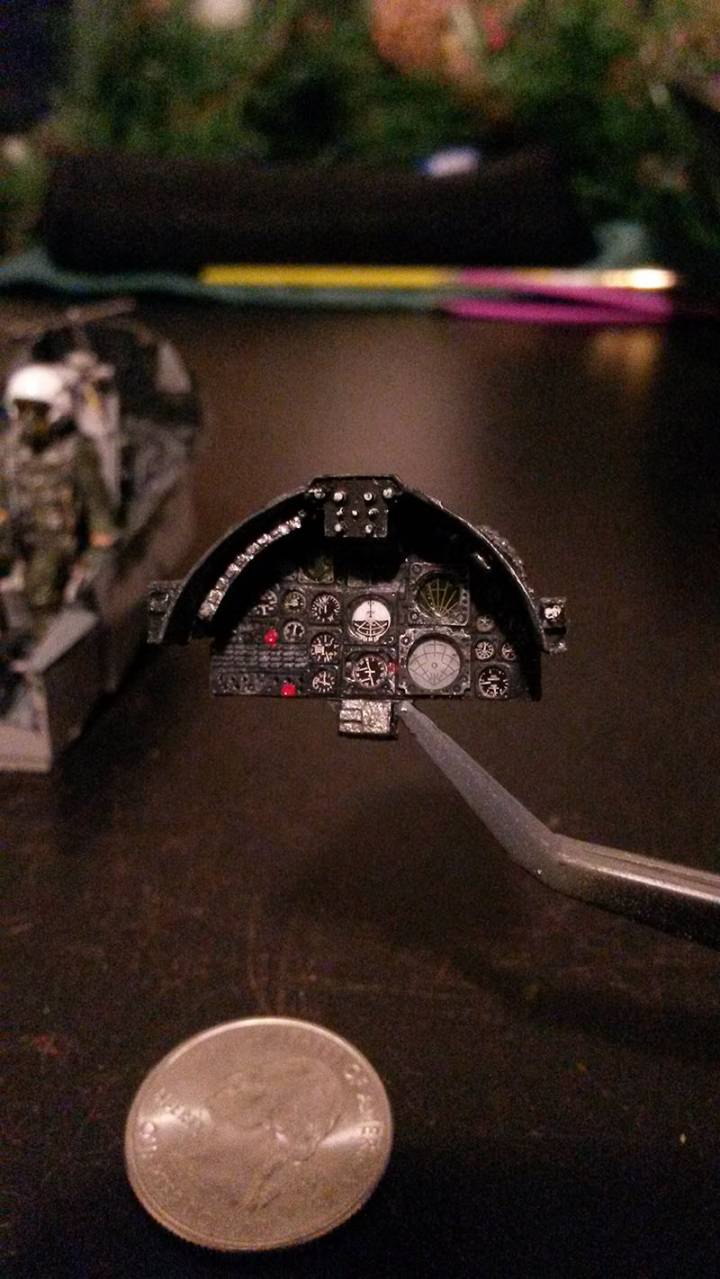 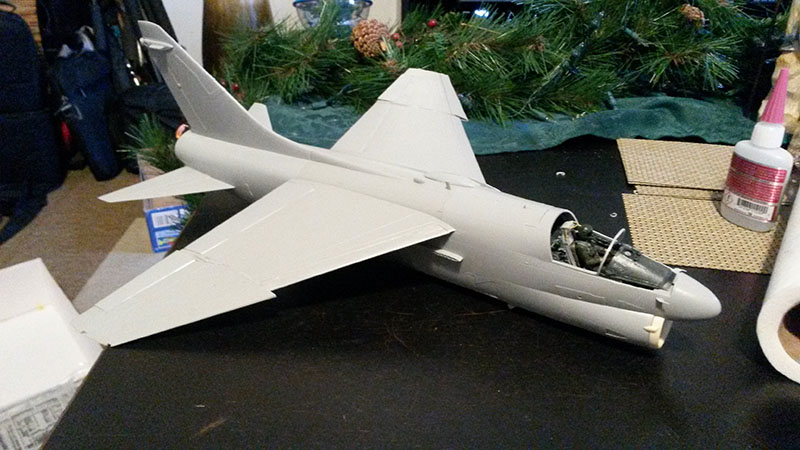 PROFILE
charging_rhinos (Dustin) said
So I came across something new today.

I've never had a clear canopy part that came cracked from the factory, but this one has a crack that propagates right up the center of the front/windscreen portion. Completely unusable, unless I do an A-7 wreckage diorama. I've emailed Trumpeter, and they said that they will send me a new one soon. I'm not sure what soon is, but it's got me a little worried that it won't arrive in time.

Does anyone have a spare 1/32 A-7 canopy they'd be willing to part with? I'd be willing to compensate you handsomely for it. Especially if it were one of those elusive vacuformed canopies from Zactomodels

PROFILE
kevinekstrom (Kevin Ekstrom) said
Have you tries dipping the canopy in future floor polish? I would give that a go and see what it looks like when it dries, it's possible it may look usable. It's worth a try.

Have you tries dipping the canopy in future floor polish? I would give that a go and see what it looks like when it dries, it's possible it may look usable. It's worth a try.

Thanks for the suggestion. I had actually forgotten about this thread, I'm glad you reminded me of it.

Regarding the canopy, future dipping still showed the crack, because it was continually propagating a little bit more each day. The future helped, but the internal stresses in the plastic made it eventually split all the way up. So I eventually got a replacement shipped direct from Trumpeter. Total cost was $4 shipped (which was very kind of trumpeter to charge so little). It did take about 3 weeks to arrive, which compressed the timeline a whole lot.

I finished the project a while ago now, and I'll post a few pictures of it soon. Due to the rushed nature of the build, I didn't get any studio-quality photos of it. But it did come put pretty well.