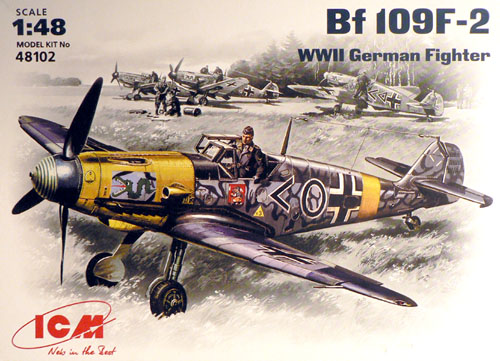 ICM''s long awaited 1/48 scale Bf 109 F-2 kit is available at last. Announced a couple of years ago, expectations were high that it could represent a real alternative to the Hasegawa kits, maybe with some additional parts and a complete engine like in their previous releases (Spitfire Mk.IX, MiG-3, Yak-9 etc...). Did ICM manage to succeed like Eduard did with their Fw 190 kit? Read the review and make yourself your own opinion!

Guess what kit I was preparing to review today!

Nicely done! Your own experience with the kit pretty much matches mine exactly and, at times our texts almost paraphrase each other! We always joke we're twins!

Rather than bore everyone with a second full review, I'll just quote a couple of bits from my own that might add to the overall picture:

" Sadly, after the Spitfire fiasco, the obvious question that springs to mind with a new ICM kit is "What about sink-marks!?", so let's get that out of the way first. Basically, there are none at all in my sample! (Brief pause while the shock sinks in...) That's right - none. That's certainly not to say all's perfect moulding-wise - there is a bit of flash here and there and the nose radiator door isn't fully formed, as though the styrene hasn't completely reached into the mould. There's also an odd ridge along the base of each fuselage half that will require sanding off.

The surface has a semi-matte finish which should polish-up quite well, given the soft styrene used, but there a few pock-marks in places (whether that's a technical moulding problem or a sign of damage to the moulds, I don't know). Panel lines are neatly engraved for the most part (if perhaps a little on the heavy side), but do vary somewhat; for instance, those on the top panels of the wings are much heavier than elsewhere and one elevator hinge-line is scribed much deeper than the others. The depiction of fabric surfaces is similarly mixed, with the ailerons and elevators looking quite good, while the rudder is grossly overdone.

... Although I'm always very wary of published plans when I have no way of verifying them, comparing the ICM and Hasegawa kits with Kagero's plans is interesting. ICM's cockpit is positioned slightly further forward, matching the plans rather better than Hasegawa and the rear fuselage is slightly "chunkier" - again a better match. The angle of the fin is slightly raked back on both kits, but ICM's tailplane seems a better match for span. The leading edge slats are slightly longer than shown by Kagero but, overall, the wing seems a fair match. The wingtips are often a bone of contention and neither kit quite captures the shape shown on the plans. The propeller blades are very peculiar, being shorter and far more pointed than shown any reference I can find.

A test fit is a rather mixed bag. The fuselage halves match up well enough, with panels all lining up and the tailplane is an excellent fit. The wing is another matter... the upper halves include quite nice interior detail (for the circular-style wheel-wells!), but this is actually slightly too large for the openings in the full-span lower wing and prevents the parts closing without modification. The separate wingtips are much thinner than the wings, so a lot of careful filing and sanding will be needed to blend them in. The multi-part nose obviously defies a test fit - but I'd be prepared for some extra work lining it all up..."

On the subject of the decals, I think there could be a fair bit of variation in quality. While you say your sheet was perfectly in register, mine certainly isn't - a bit of a moot point really, as I doubt many people will want to apply the ICM items anyway, given their dubious reputation in use...

There could be similar quality-control issues with the clear parts. Although, like you, I found the canopy thin and very clear, my example is spoiled by flow-lines.

Guess what kit I was preparing to review today!

Nicely done! Your own experience with the kit pretty much matches mine exactly and, at times our texts almost paraphrase each other! We always joke we're twins!

Damn! Sorry for doing the same review! I got my kit Friday and wanted to publish it yesterday... but little Vincent came in the way so I did it today!

I hope you didn't wanted to review the REMI vacform base as well! :-)

Anyway, it would be nice if you incorporate your text to the review. Your english is far better and you pointed out things I didn't saw.

Rowan, below is a picture of the aftermarket set you've sent me lately. The fit is perfect! Thank you very much again! 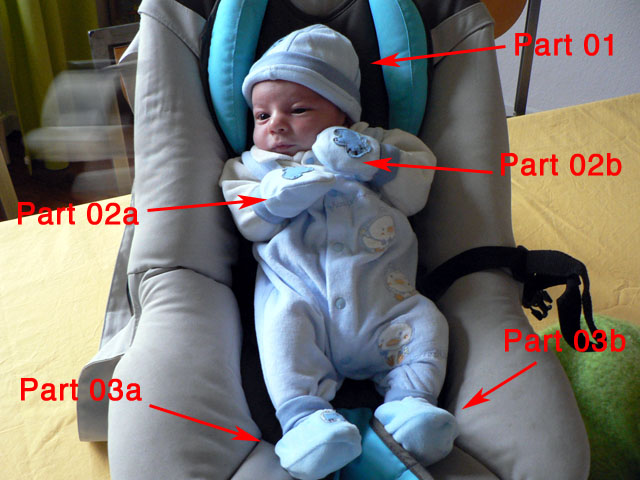 No - fear not... I wasn't going to review the vacuform base! I was almost ready to review the '109F a couple of weeks ago, but work got in the way - so I'm quite chuffed you saved me the trouble of typing out all of my text!

(I'll see if I can dovetail my notes into your excellent review).

Vincent looks a fine lad in his all-blue Aeroscale flying suit! He could start a new craze for modelling in mittens!

Hmmm...am I the idiot uncle locked away in the attic the rest of the family only whispers about?

J-L- Vincent is a fine looking young man! I look forward to his graduation from L'École de l'Air !

You ought to scratchbuild his carrier into a Martin-Baker replica!

PROFILE
_H_Dori (Howard) said
I must be a bit strange (read as idiot) because even though I've read the review and it's not the most favourable I still would really like this kit. I'm currently building the ICM Mustang III (kit no 48123) and the parts don't fit that well but....I'm quite enjoying it!!!

I'm certainly no master modeller especially as I've only just returned to the hobby, but I'll probably buy the 109, and probably the Spitfire MkVII that ICM do.

I must be a sucker

You're certainly no sucker! ICM's is the most accurate mid-period Spitfire on the market! - it's just not the easiest to build...

Likewise the new '109 - as I say, it scores over the Hasegawa kit in a few areas, but ICM do have a huge hurdle to overcome in terms of their reputation for quality control. That may sound harsh and even unfair - believe me, I'm on their side - but it's a simple statement of how they're viewed by many modellers.

PROFILE
Darson (Darren Miniken) said
I was handed my copy of the ICM 109 F-2 on Saturday for a magazine review that I will be doing on the kit and to tell the truth I hadn't even opened the box when I read Jean-Luc's review.

As soon as I had finished reading however, I raced away to see if my copy contained the same flaws (little pits in the wings etc) and I must say that mine was identical to the kit reviewed by Jean-Luc unfortunatley.

I must say that even with some of the little flaws and issues mentioned, I'm definitaley going to build this one, although I will be replacing the wheels, decals, prop and adding some detail to the cockpit.

PROFILE
_H_Dori (Howard) said
Thanks Rowan
I understand they're not the most expensive kits, but I quite enjoy them. One thing I've noticed with the Mustang is that the parts really do need a good wash before you try to put any paint on.

Thanks for the reply.