Early Aviation
Discuss World War I and the early years of aviation thru 1934.
Hosted by Jim Starkweather
Another finished - 1/48 Eduard Albatros D.II

Here's one I have been working on in slow time as essentially an Out of the Box build - the Eduard 1/48 Albatros D.II.

I had to resist the temptation to even make minor modifications / replacements such as replacing the small wheels with larger wheels, adding bungee chords etc (I even used one of the paint schemes provided in the kit which is odd for me). The only additions, in keeping with the essentially OOB spirit, was the opening of the gun barrels and exhaust, and the addition of rigging (no turnbuckles this time....). I even used the kit axles and radiator pipes (it was hard to resist replacing these!!).

I painted the kit up in the markings of Alb D.II (OAW) 910/16, flown by Ltn Max Bohme of Jasta 5, March 1917. This aircraft was shot down and captured by the British in March 1917 and is well documented in photographs. I quite liked this scheme as it is different from the plain old standard ply fuselage / camo wings scheme seen on so many D.II's. The Eduard kit contains decals for this scheme, but misses the fuselage band and the OAW style underwing white-bordered crosses, and gives this scheme as a 2 colour scheme. I based my 3 colour scheme on Dan San Abbott's article on the colour schemes of the D.II on TheAerodrome.com website (which includes this particular machine) and added some under wing crosses from the spares box. 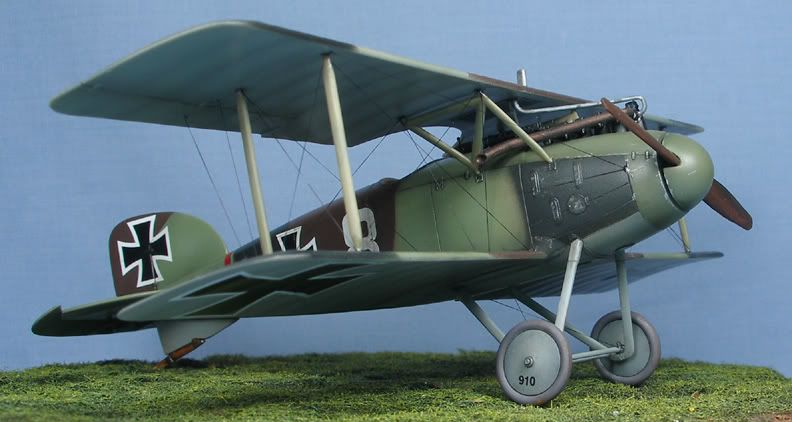 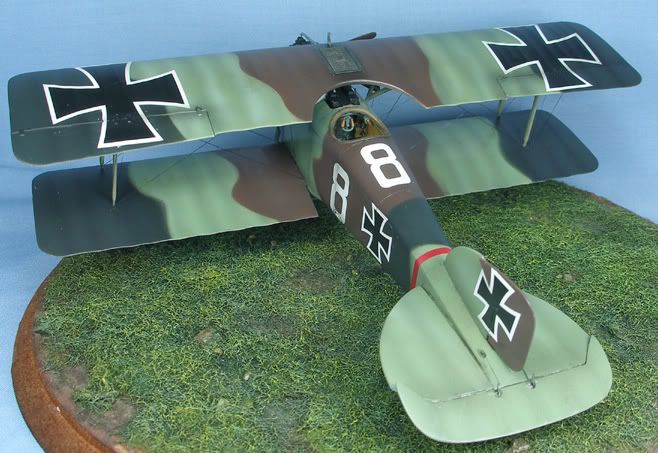 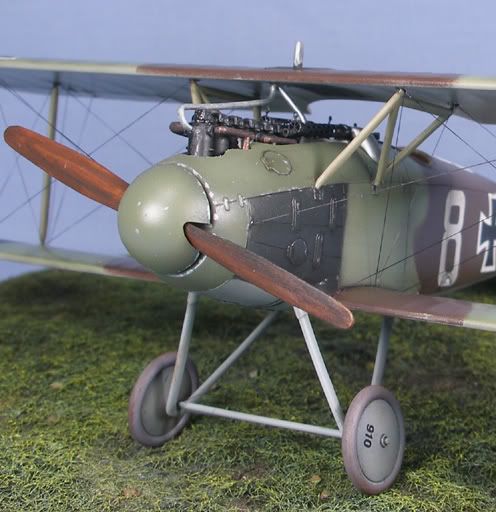 Overall this was quite a trouble free build - the only thing to watch out for is to test fit the interplane and cabane struts before gluing to make sure it all lines up. Get the alignment right and it is all good.

I am hoping to get this (and other) builds to the Model Expo in Melbourne Australia in a couple of weeks - my first interstate trip with my models - yes I am nervous!

As always, comments and feedback welcomed.

PROFILE
Draken35akaScimitar (Daniel CLAMOT) said
Splendid!!! I really like it!!!
In stock: too much! On the workbench: too much! Finished: not enough...

PROFILE
glamdring said
Brad, Really, really nice job. I am very impressed by your work. In another one of your build threads you mentioned a product called knitting with elastic (that you use for rigging). Where do you find this stuff. I tried the local craft store (MIchaels) but they hadn't heard of it. Thanks, and again top notch stuff.
Allen

PROFILE
Repainted (Lars Qvarfordt) said
Thats a nice build Brad. I dont think you going to have trouble at the expo. My guess is that the other guys are the ones who will have the trouble. Good luck, and give us a report from the expo.

Allen - I actually got my knitting in elastic from ebay about 18 months ago as they don't sell the stuff in Australia that I could find - have a seach on there if all else fails.

PROFILE
glamdring said
Thanks for the tip Brad.
Appreciate it!
Allen

WWW
lampie (Nigel Julian ) said
Wow Brad.
Another cracker! You should do really well at the Expo.
I have found some "knitting with elastic" on Ebay and ordered it. Is it suitable for 1:72 as well as 1:48,and do you have any tips on using it?
Whats next on your workbench?
Nige

WWW
JackFlash (Stephen T. Lawson) said
Brad as usual a fine build! I am looking forward to your next . How about a kit preview and build? Take us step by step or problem solving with one or two in progress?
". . .The most important thing is to know why you build and then get the most that you can out of building." via D.D.

In terms of tips, I don't really have any - this stuff is very easy to use and glues with superglue - in fact I can rig a biplane with this stuff prior to even putting a top wing on. The only tip I have is that when you install it, don't stretch any single length for too long - over time it will either pull out of its mounting hole or start to pull control horns etc off the model.

PROFILE
CaptainA (Carl Althaus) said
The first model I ever purchased and built was an Albatros. About 1966-67. I still think they are the best looking aircraft ever built. You did a wonderful job.
"Treat 'em Rough", Current Builds--Wingnut Rumpler

I am frequently seen with blood shot eyes from staying up past my nap time to get the right colour scheme on my latest WWI model?