About Drabslab (drabslab)
FROM: EUROPEAN UNION

I made my first airplane models when I was about 11, a Mistubishi Zero, a Messerschmidt BF 109 and of course, a Spitfire. They were all Airfix and all 1/72. Sounds familiar? I remember I could not even pronounce Mitsubishi, I used to call it Mutsibutsi. I continued building mostly airplanes until...

Copyright ©2021 text by Drabslab [ DRABSLAB ]. Images also by copyright holder unless otherwise noted. Opinions expressed are those of the author(s) and not necessarily those of AeroScale. All rights reserved.

drabslab
You could also say: "if ever one will be finished." I have been walking around this kit now for almost 3 weeks and its a huge amount of work, and requires quite a bit of planning if you want to do more than simply put it together and paint it. Displaying it is not such a big deal, it can easily be put vertically against a wall, or be hung from a ceiling. (at least that is what I am telling myself now
MAY 18, 2017 - 12:04 AM 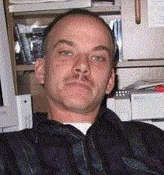 Headhunter506
The best way to do that is to purchase a smaller, less complicated vac kit to practise on before you attempt your masterpiece. If you like, I can recommend several different ones. Once all the parts are cut out and prepared, a vac kit is very much like any other kit apart from the thickness of the plastic. You need to plan out supporting tabs along the edges of the parts, and for a large kit such as yours, you will likely need internal supports. There are several threads in other fora regarding the building of vac kits which can teach you much[/quote] The styrene is 1mm thick, which is about the average for injection molded models. The type of styrene used for vacuform models is formulated differently (softer, less rigid), which is why there is a greater amount of flex in the parts. The best way to use support tabs is to alternate them on each side of the fuselage, making them interlock with the tabs on the opposite edge. The scrap plastic left over from the wing sheets is perfect for making tabs,; just sand off the ridges until the surface is level and you're good to go. Adding internal supports, like bulkheads, will eliminate the flexing. This kit contains parts for six bulkheads, four for the main and two for the rear fuselage sections. For a model 39.2"/995.4mm long, that isn't sufficient to eliminate torsional rotation along the fuselage. Adding two more in the main fuselage, with two more in the rear, will make for a sturdier, stiffer model. Invest around six bucks in a contour gauge. You can get accurate contours of the inside of the fuselage along different points and make bulkheads which will fit perfectly without any gaps around their edges and the fuselage. You could also use the contour gauge to fabricate ribs to reinforce the wings. If you want to take it a step further, reinforcing the interiors of both fuselage halves with fiberglass cloth will result in a really solid, non-flexing part. Good scale drawings are a must when constructing this kit. I printed a set of 1:48 scale drawings using a Boeing factory plan. They're huge; but, they make building this model less of an ordeal. If anyone is interested in the plans, PM me. I'll provide you with a d/l link.
JUL 25, 2017 - 10:07 PM

Headhunter506
An interesting thing to note is that, according to the drawings I have, the spine of the rear fuselage isn't parallel to the main. There is a +2° rise of the spine, from where it attaches to the front main section. It's almost unnoticeable; but, it's there. You will see it if you lay the sections over the drawing. You can glue an 8x70mm strip of .010 styrene along the join line on the inside of the front main fuselage; then, place the section on the drawing. Next, place the rear fuselage section on the drawing abutting the tip of the spine of the front section, keeping the styrene strip under the join line edge, aligning the top of the rear fuselage with the drawing. There will be a narrow wedge that will be formed. Brush a small amount of liquid cement where the styrene strip meets the rear fuselage join line in order to secure its position. Apply some 5 Minute epoxy along the wedge, filling it. Wait until it sets and sand the joint smooth.
JUL 26, 2017 - 01:30 AM

drabslab
This B-52 will be quite a challenge, but the first steps are taken and ... lokoking more ofr less good so far: First I painted all the borders of the parts black: 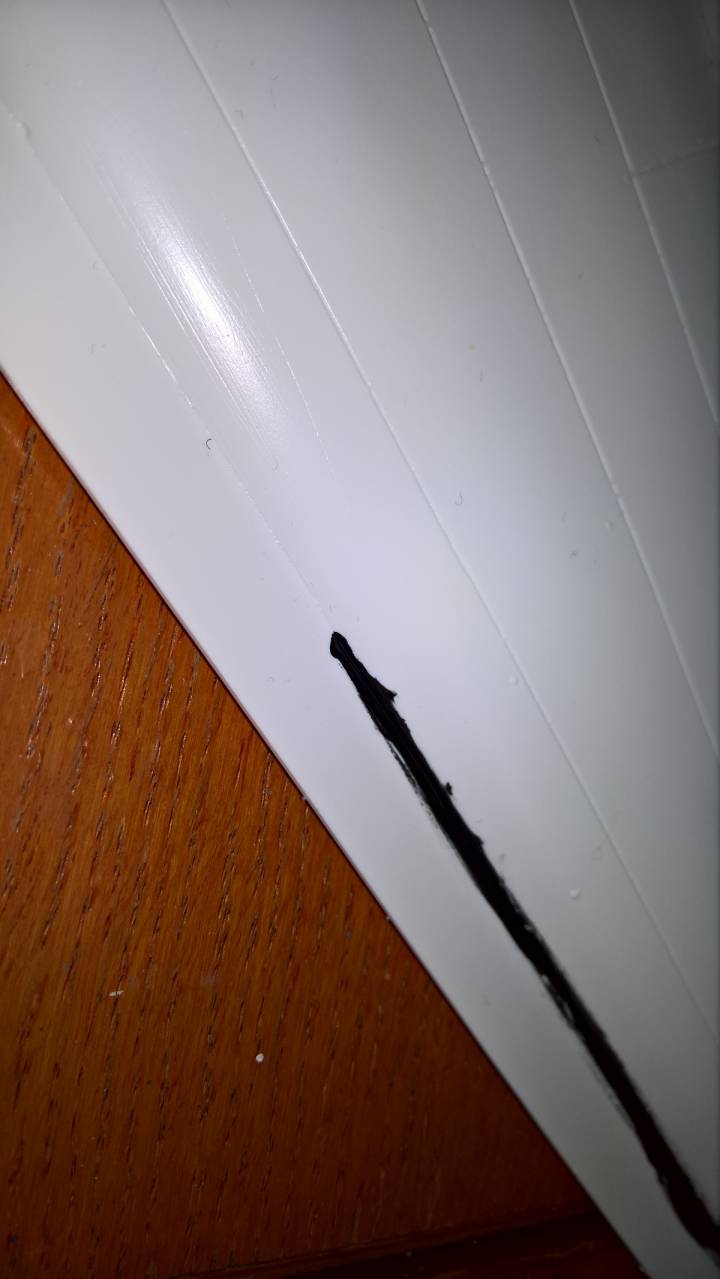 I tried a marker pen first but it proved difficult to reach the corners between part and frame and that is quite important for later steps. It looks like this when all done: 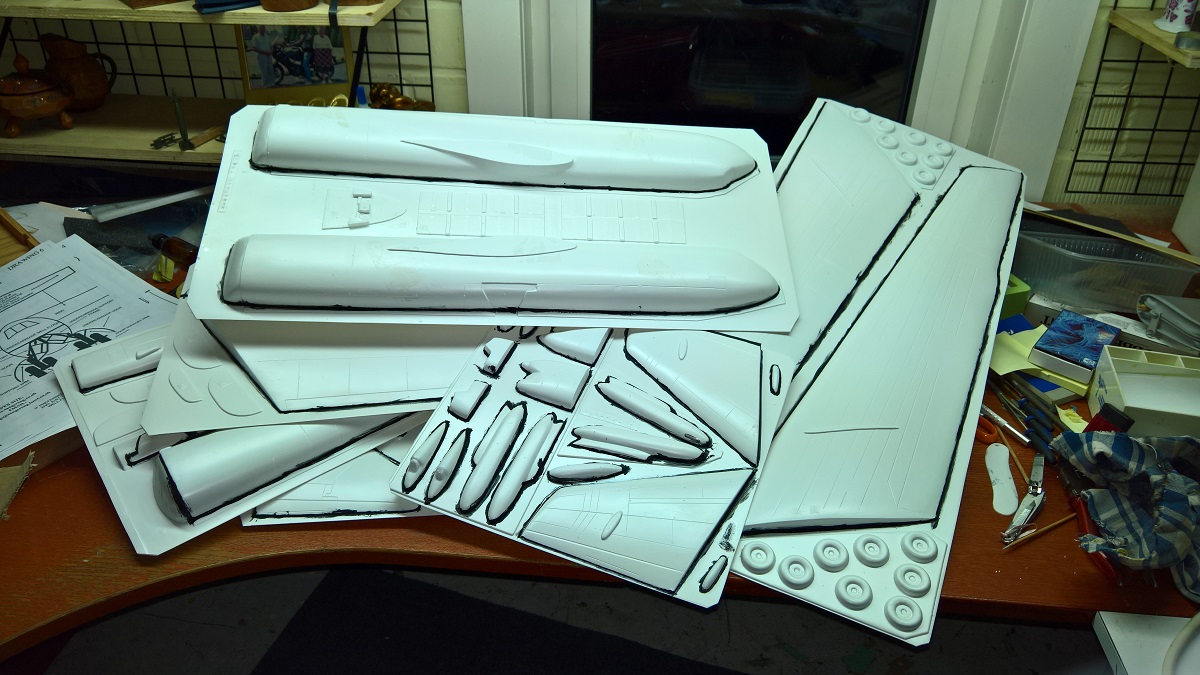 I would not paint these lines again, next time I will airbrush the parts in black primer. It will immediately emphasise the anomalies in the surface of the parts and it will probably give much better results compared to painting only the borders. Then, with a new blade I cut the parts loose. 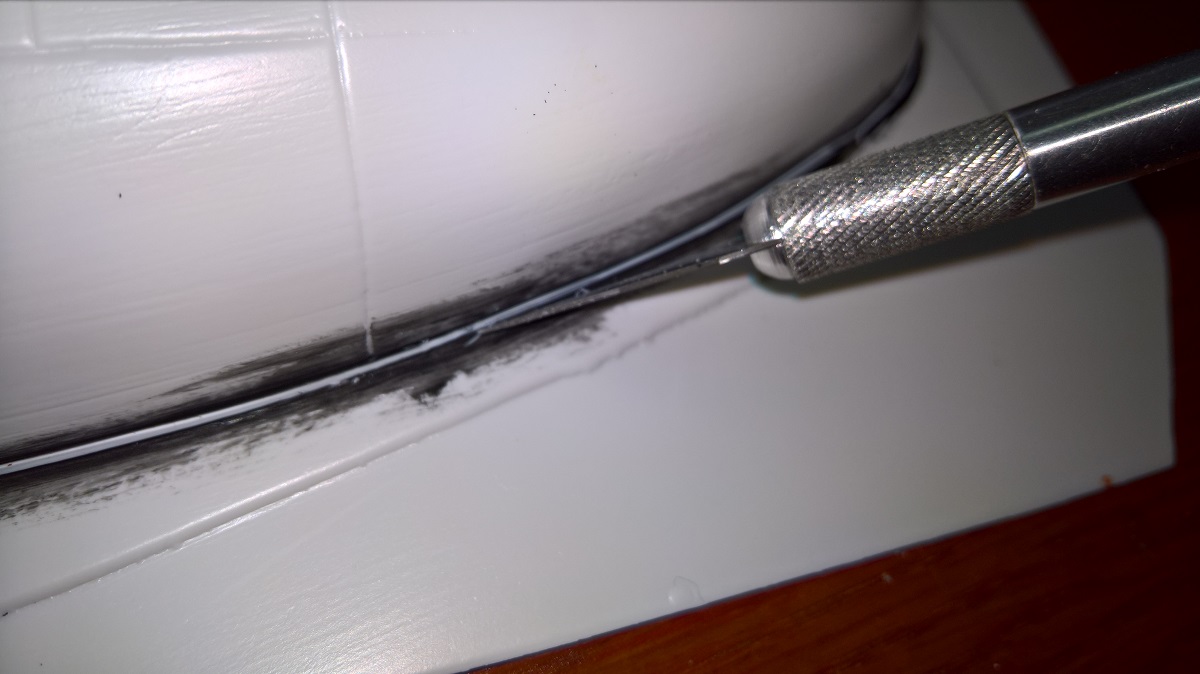 Instructions say that you have to try cutting under a 45 degrees angle so that you cut "under" the part. That is not as easy as it seems. My 3 day experience says that it is is better to cut gently and mulitple times along the same cutline than to try cutting through on one or two strikes. The same instructions say that it is not necessary to cut all the way through. However, I prefer doing one extra cut because that makes it much easier to break the parts from the sheet. I am not cutting all of them in one go, just those parts that i need, but could not resist doing some of the main parts. This is going to become a big model: 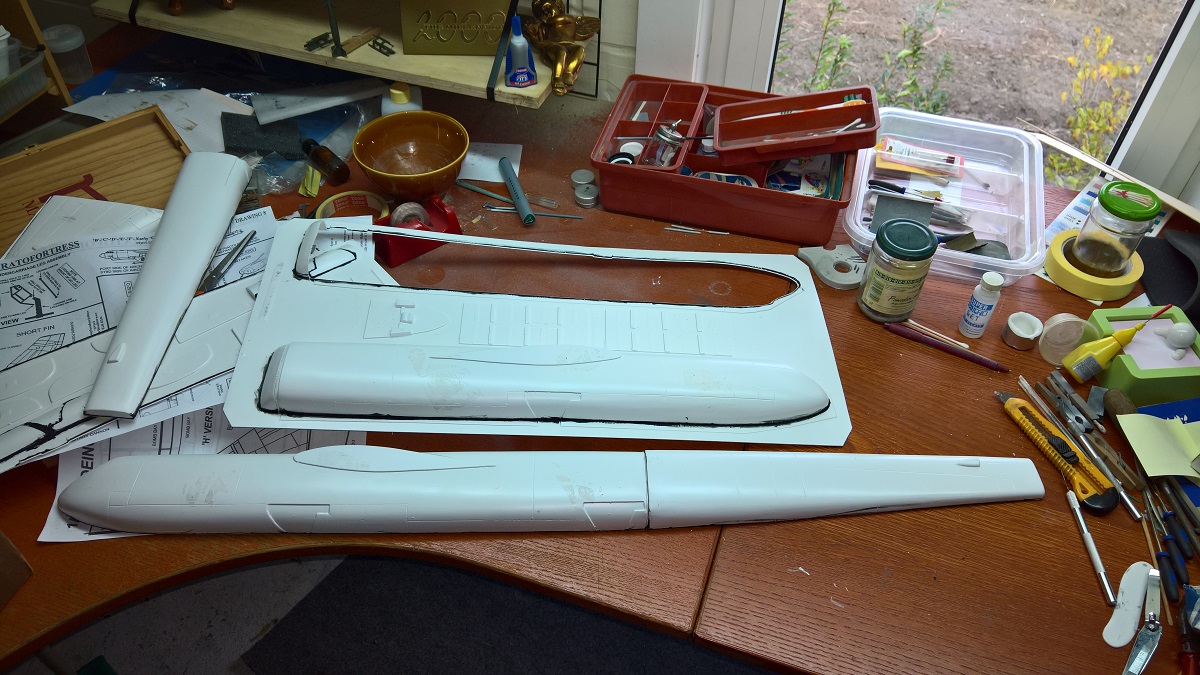 This is how it looks after cutting a part free from the plastic sheet. Everything below the black line mus be sanded away. 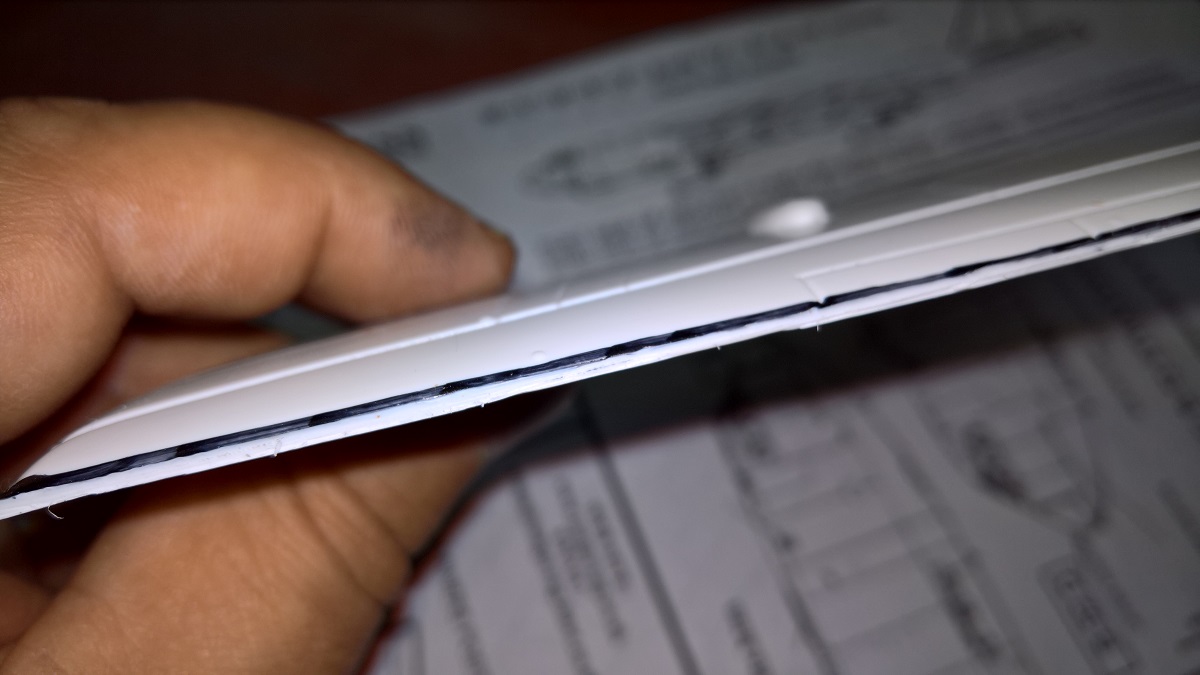 I expected that this sanding would be a nightmare but a large sheet of rough sandpaper on a flat surface works miracles. Having no experience with vacform, I decided to assemble some stand-alone parts first. So here it is, my first assembly; the 2650 liter external fuel tanks. Glueing these tanks proved more tricky than expected. The parts are not Tamgawa perfect, even are slightly different in size, and there are no pin-holes to help positioning the parts. 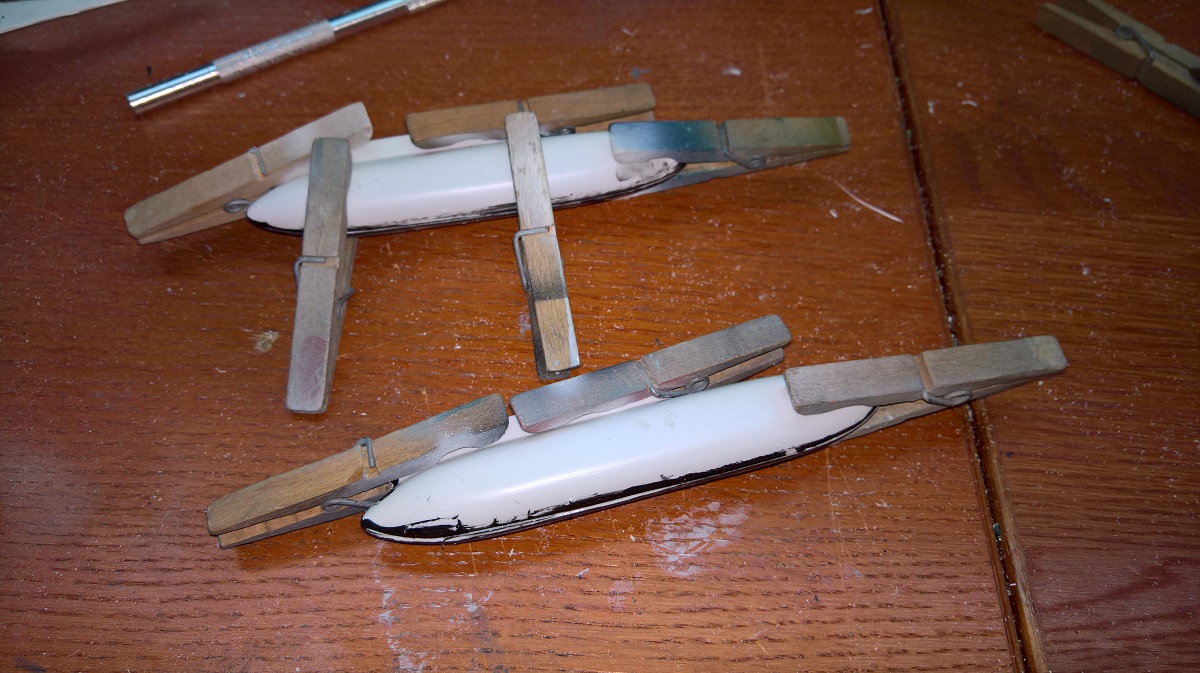 Next came the vertical tail parts. 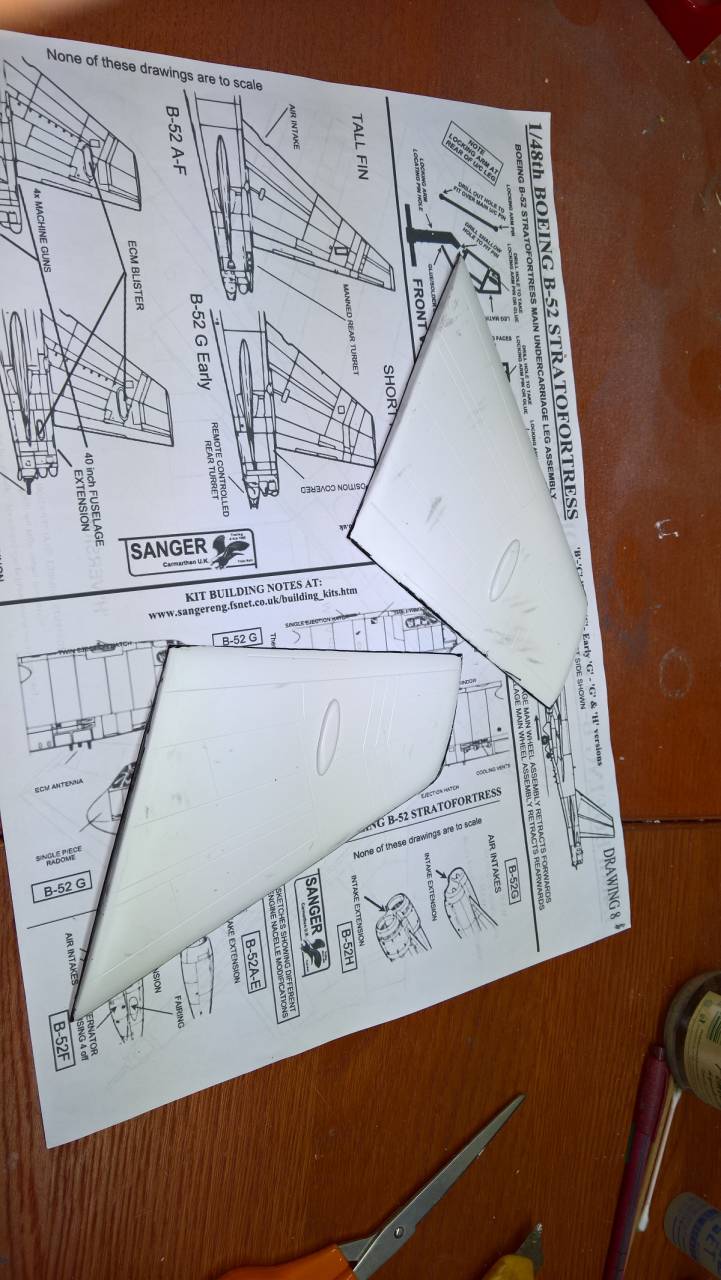 Not identical in size, and without any help from locator pins and holes, this seems like complete guesswork. So I glued some small leftover plastic (one benefit of vacform is that you end up with heaps of such material) on the inside of the parts. These pins proved to be perfect for fixing one direction of travel of the parts. 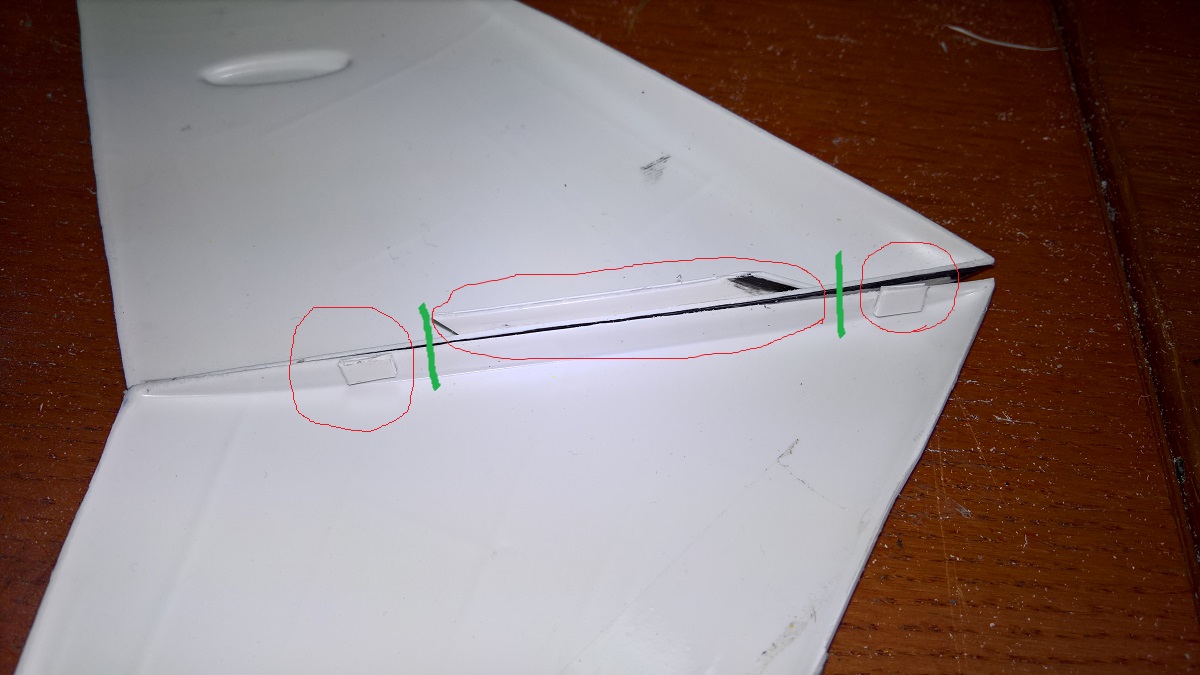 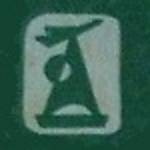 lmsharp57
Congratulations on starting the Sanger Buff. I have the B model but had to stop temporarily due to lack of construction space. I have all the parts cut away and sanded and a command deck partially completed. I look forward to seeing your progress on this fellow.
MAY 29, 2018 - 03:13 AM

drabslab
Hai, It is NOT an easy one, I can tell you. Unfortunately, I can't upload any pictures anymore on this site but if this gets resolved I will add a few pictures.
MAY 29, 2018 - 08:14 PM
Go to Forum Topic