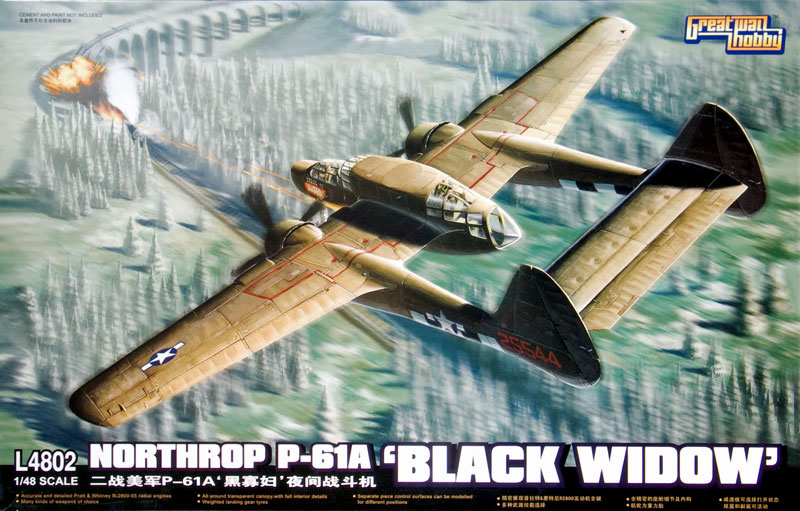 PROFILE
Jessie_C (Is a secret) said

There's no mention of whether nose-weight is required to avoid the kit being a tail-sitter (and it's so many years since I built the old Monogram classic kit as a teenager, I can't remember if any was needed - although I seem to recall a clear plastic prop?...)

The Monogram kit was most definitely a tailsitter. If you didn't want to use the clear prop, the only alternative was to fill the radome with so much lead that the radar couldn't fit in. I fear that much the same will happen with this one. Terry Dean made a weight (to fit the Monogram kit and I'm not sure whether he's still doing them), but it's shaped to fit inside the radome, which will make the so very nice clear dome a little redundant.

One would have to get creative about putting the weights under the cockpit floor, behind the instrument panel, in the booms right behind the firewalls and hope the landing gear legs wil be able to hold it all up.


When once you have tasted flight you will walk the Earth with your eyes turned skyward.
For there you have been, and there you will always long to return.
-Leonardo Da Vinci

PROFILE
Bronze4 (Dave Shaw) said
Like its elder counterpart, this kit would lend itself well to a diorama setting, having much of the detail already in the box. Having the motors, gun bays, radar, and the like included could kill two birds with one stone. Mounting it to a base would eliminate the need for nose weight and having the motors exposed would eliminate those unsightly looking cowls. I am no rivet counter but those cowls look way out of shape. Perhaps not as bad as the cowls on the Trumpeter C-47 but they do look off to my mark one eyeball.

Like I said, I am not obsessive about such things, to me Monograms A-26 is close enough to give you an idea, but the fronts of the cowls on this P-61 look way to narrow to me. I wonder if grafting the Monogram cowls would be possible. I do have a scrap Mono P-61 not doing anything.. hmmmm.

In any case, I am excited about this release, that is long over due, and I cant wait to see them show up on the model sites all built up. I will be getting one to be sure.

WWW
BlackWidow (Torsten Rossmann) said
Thanks for the review, Rowan! I'm pretty exited about this release after nearly 40 years of waiting. And finally there's a clear nose in the box! That's fine but why is it clear and not "milk glass"? Okay, some fine sanding will help out. And you will need a lot of lead in the nose, so there will be again no radar. I've even put it in the booms behind the engines, not to make it a tailsitter.
I've built the old Monogram kit (from 1974) twice early last year for the Twin Boom Campaign coming out as a P-61 B ("The Spook") and a P-61 A ("Lady Gen"). But I will get this new kit anyway. My nick says it all, right ....?

But I will look at the aftermarket to get some other decals, as "Lady Gen" stands already on the board .... And let's hope they will bring also out a P-61 B with turret!
Happy modelling!
Torsten 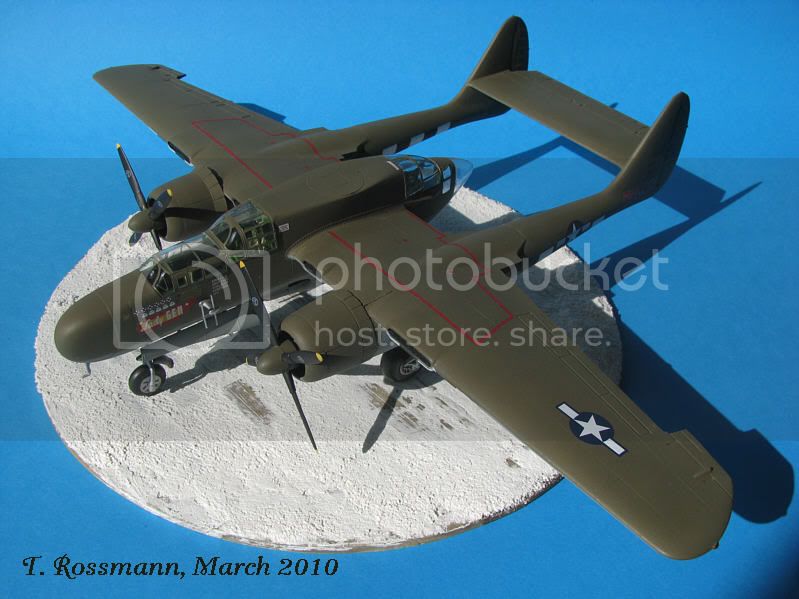 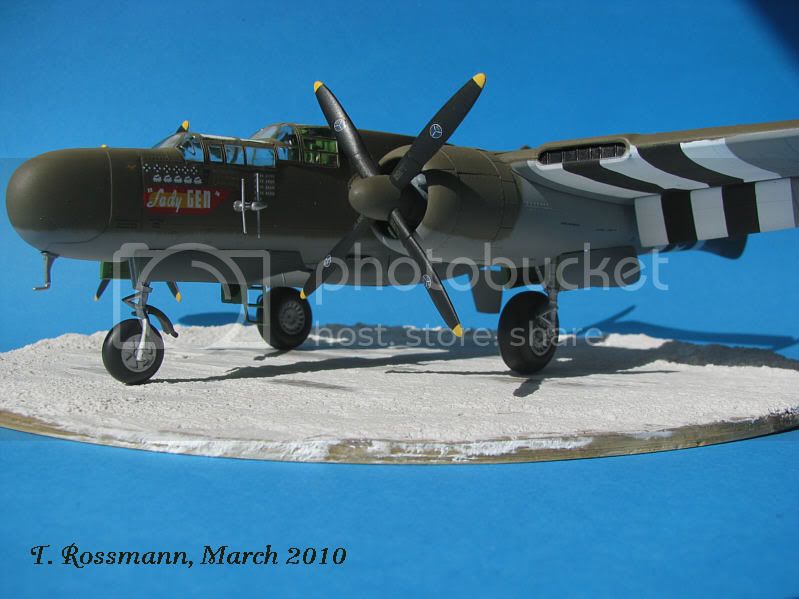 I couldn't resist doing a bit of basic prep-work ready to start buiding the kit, and I found an odd omission that I didn't notice when I originally wrote the review; the engines are missing their magneto covers. It's very strange - the positions are marked all ready for them, but there's no sign of them on the sprues or in the instructions. It's almost as though the designers intended to include them and then forgot: 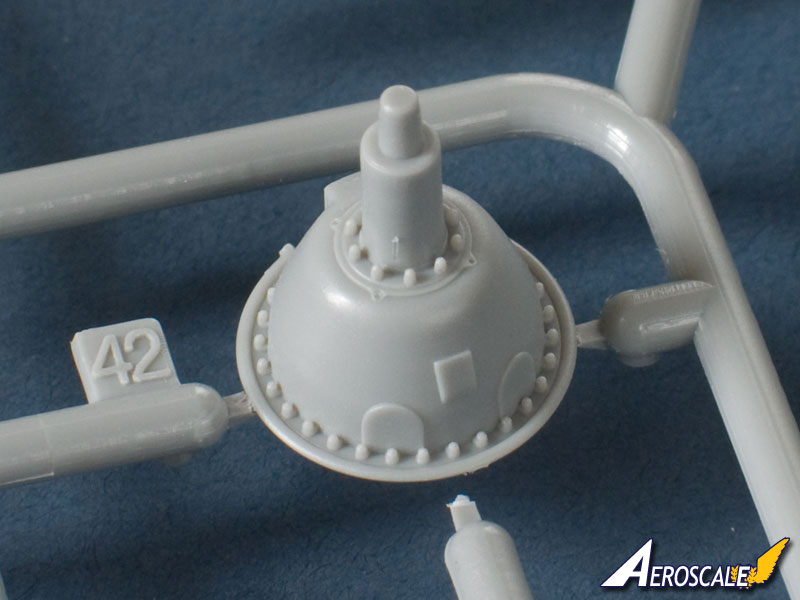 I'm hoping to kick off the build properly later this week if I manage to clear the decks a bit.

So we possibly need:

PROFILE
Jessie_C (Is a secret) said
Speaking of things Black Widow, I wonder if this set will fit the Great Wall kit? Next I wonder how soon they'll come out with one that does?
There's also this lovely set, this and this for the diorama or vignette builders. These sets seem to be all that's needed to settle the uneasiness of certain posters about this kit's "horrible flaws".
When once you have tasted flight you will walk the Earth with your eyes turned skyward.
For there you have been, and there you will always long to return.
-Leonardo Da Vinci

PROFILE
GastonMarty (Gaston Marty) said
Vector"s resin P-61 canopies are a fair improvement, but do not in any way fully correct the shape inaccuracies of the Monogram P-61, or of the new GW kit: It is not their fault as correcting fully the Monogram kit is way beyond what a simple canopy part could provide...

I would say Vector represent a 30-50% improvement towards the minimum I feel is needed at near 100%. That is very good considering the base material...

To correct the Monogram, and likely very similar for the the GW kit(?), the entire nose of the kit has to be completely re-built, and major basic proportions changed... The entire radar radome has to be shallowed-up or replaced, as the Monogram part is far too deep, as is the entire front fuselage below the glass...

I will attempt correcting the GW kit nose and canopy, as someone in France claims to be able to vacu-form the deeply stepped feature of the canopy in one single piece from a master I would provide.

I doubt there will ever be a drop-in fix for either kit, as an entirely new front fuselage portion would be required (at least!)... That"s the problem when you copy a 38 year old kit...

I've no doubt Sergey would disagree with you about the merits of the Vector canopy...

Jessica - I'd love to be able to answer your question as to whether the Vector accessories will fit the new kit. While I can vouch for their superb quality, I'm afraid I sent our samples straight on to Australia for review - so, while I've got the GWH kit, Aeroscale's favourite Black Widow fan has been busy examining the Vector goodies 9-10,000 miles away! We'll have to wait for the kit's general release before he can check.

PROFILE
SunburntPenguin (Matt Jorgensen) said
Well I can't see what the problem is with this kit.

Apart from the cowlings and the props it looks like a Black Widow and when I see one at a show I will know within 10 seconds of seeing that it is a Black Widow.

Modelling is all about compromises. If manufacturers could make every kit 100% accurate, would they be easy to assemble? I would say that they wouldn't.

Gaston, your views of this kit border on obsessive. You might find plenty wrong with it and then attack with filler and plastic to correct the errors that you perceive to be there. Good on you for doing that, but to call it a nasty piece of work that has copied the Monogram kit is a little bit over the top. Has anyone actually laid one of the Monogram kits next to this kit? I guess not.

I guess in the end it is each to their own. I must be one of those people who see a Black Widow when I see the images of the sprues and box art when I read about this kit.

the engines are missing their magneto covers. It's very strange - the positions are marked all ready for them, but there's no sign of them on the sprues or in the instructions. It's almost as though the designers intended to include them and then forgot:

Not only magnetos. The crankcase (part 42) is useless, it should be covered with cylindrical cowl: 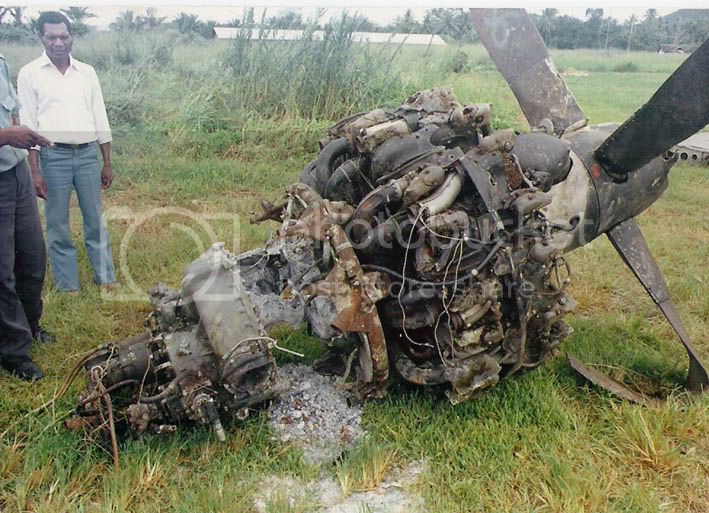 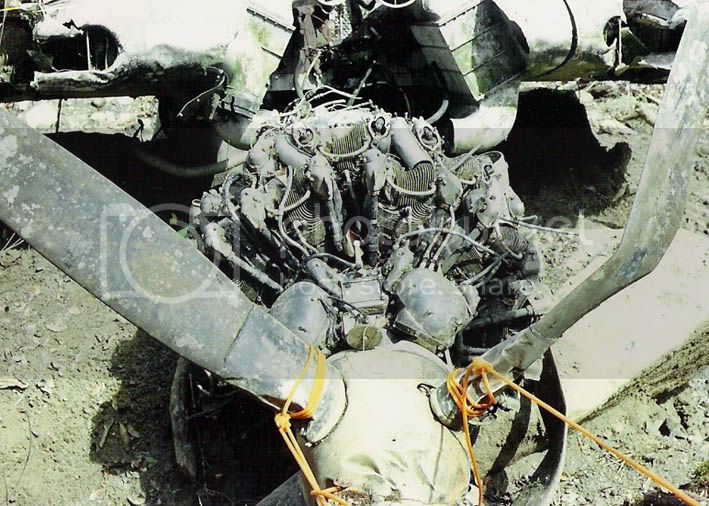 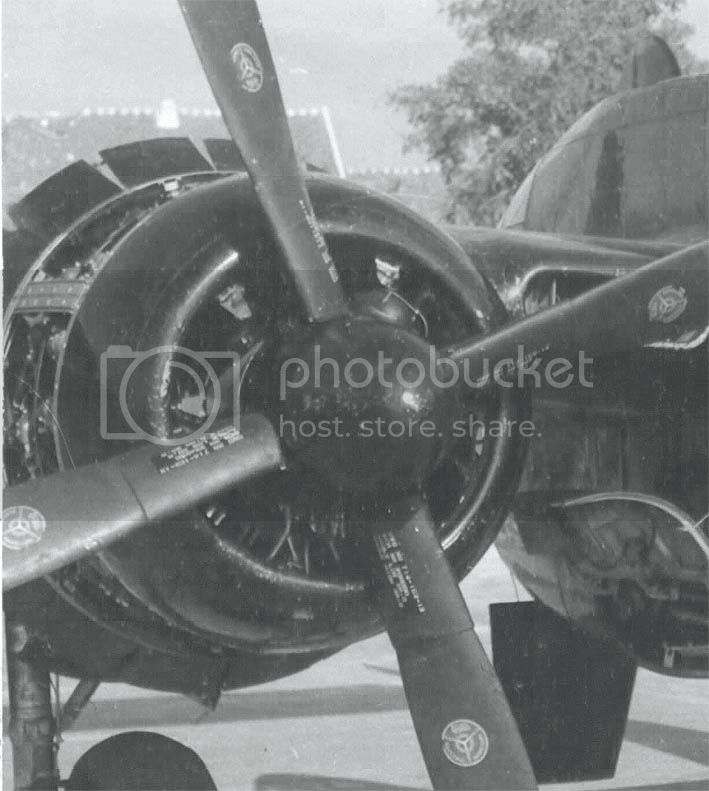 And a spinner's diameter should be: 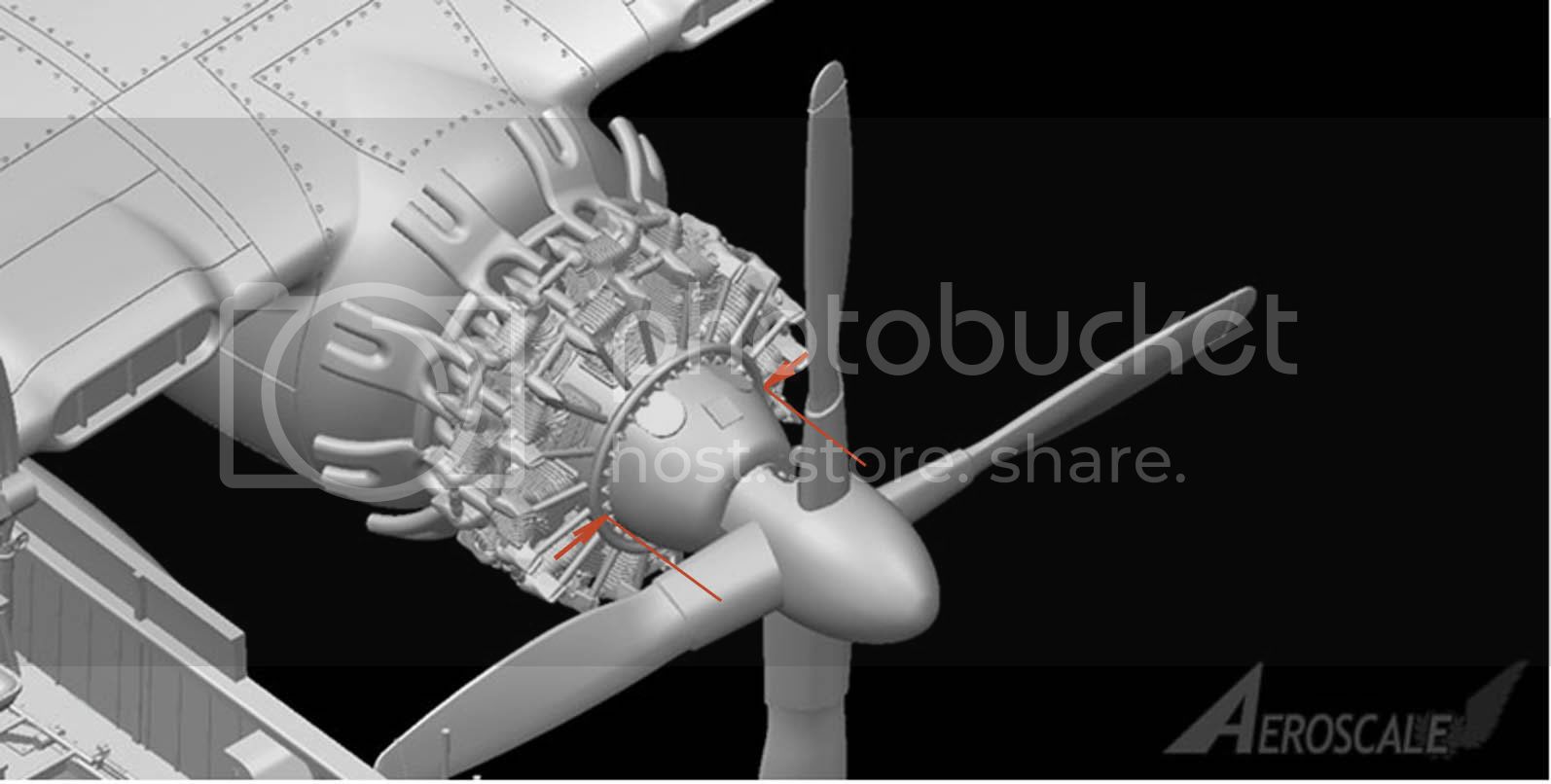 Exhaust pipes were dual, not individual: 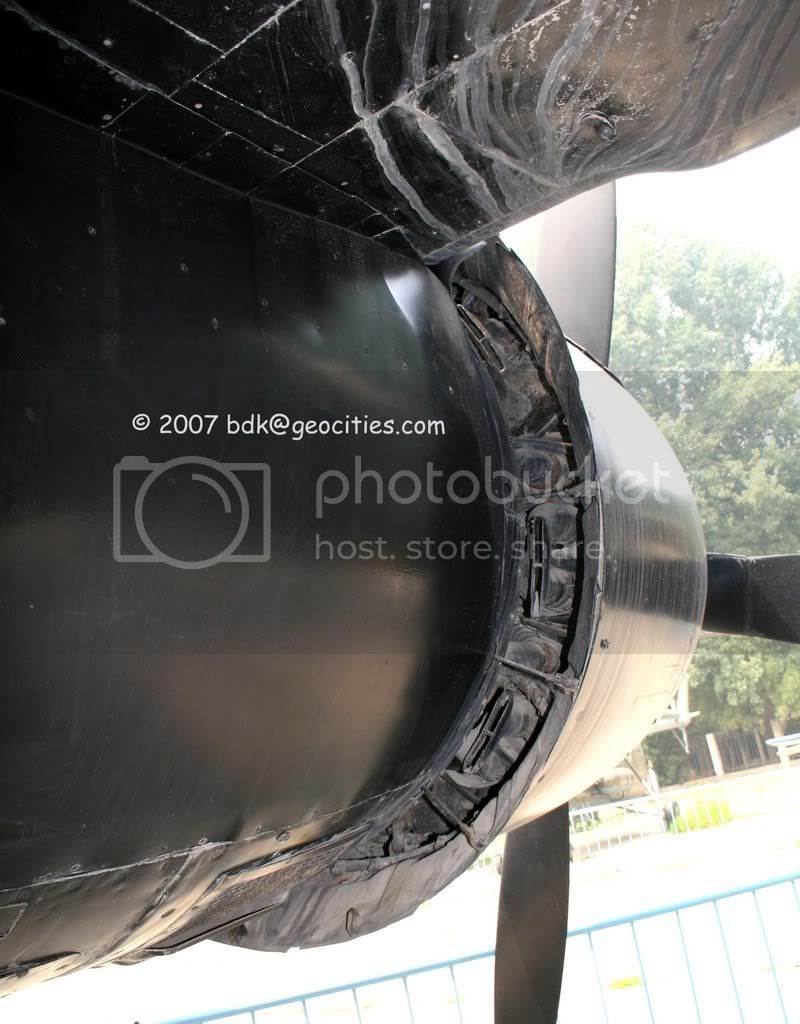 Grilles behind the engines were cowered with protecting plates 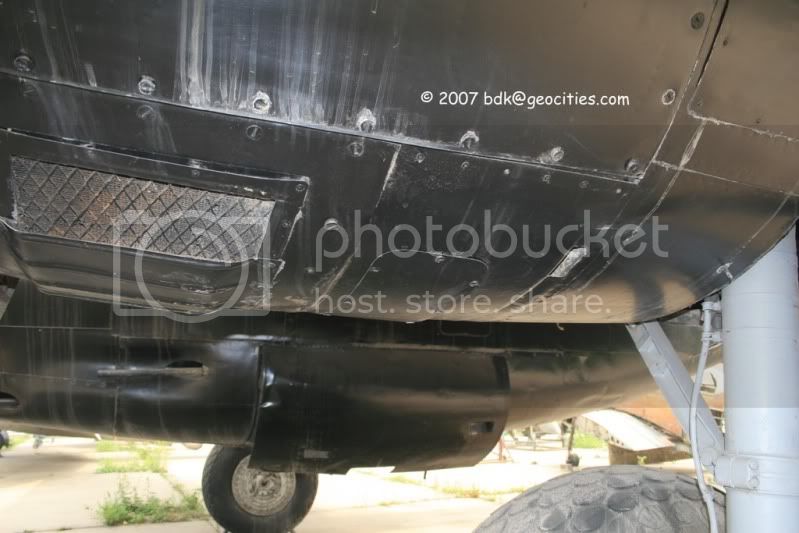 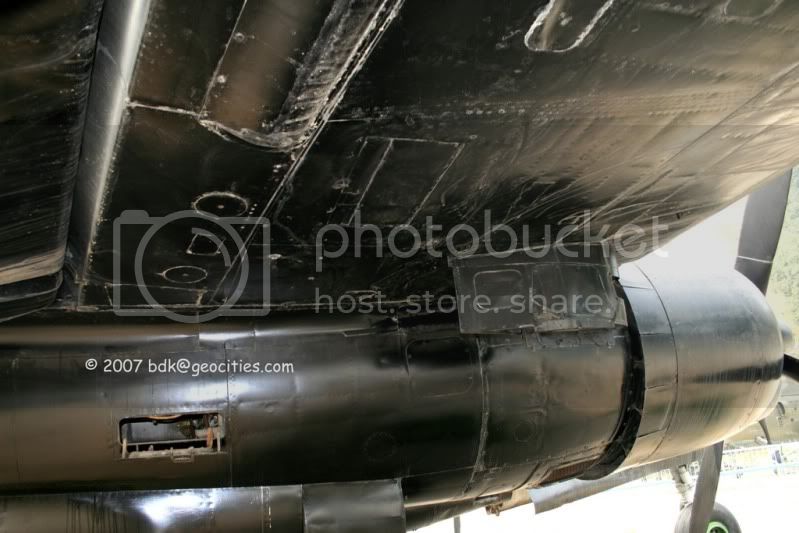 There were not any flaps behind this grilles, GWH just copied them from Monogram kit (as well as some other parts)
There should not be gaps between flap sections in open position:

Sorry for shameless self-promotion, but it should look like this: 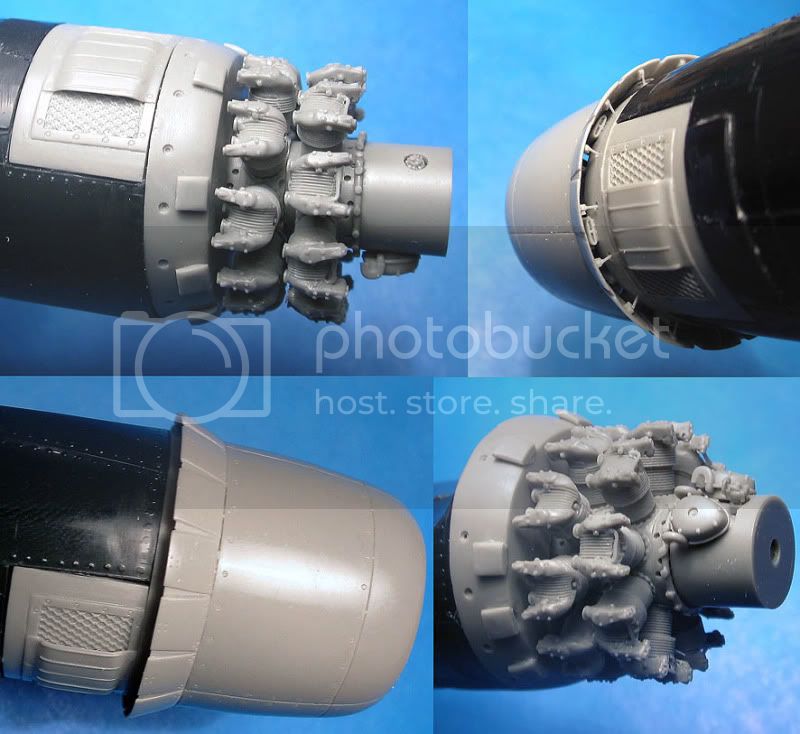 Can't say anything about canopies until I have the kit. And I have to agree with Gaston, GWP kit looks like a little bit refined copy of the old Monogram kit, not what I would expect from a 2011 year kit.

Thanks for the reference shots of the fairing - I was wondering what was going on behind the spinner when I was looking for glimpses of the magneto covers inside the cowl. I test-assembled an engine last night and couldn't shake the suspicion that the cylinders are too shallow - a view reinforced by your reference shots here.

PROFILE
GastonMarty (Gaston Marty) said
Wow! Thanks Serguey: That is very good to know, and I had no idea it was like that: That probably explains why GW gave up on the magnetos mid-way...

The silly thing is, I have the Quickboost P-61 engines, and they are beautiful, and now I realize they are complete nonsense unless you use them in a fully disassembled engine maintenance scene (which you can't do really do anyway, because of they are moulded with one-piece pouring plugs, showing the plugs behind each cylinder)....

I guess the Vector engine set is not an option then ...

"From time to time, the tree of liberty must be watered with the blood of
tyrants and patriots."
- Thomas Jefferson

PROFILE
Krischan (Christian Mundt) said
Good evening Sergey,
did you have the chance to find out if your engine set fits the GWH-Kit?

PROFILE
GastonMarty (Gaston Marty) said
It should: The boom dimensions were copied from Monogram, as were almost all dimensions, except for GW's additional errors on both the rear and front clear parts, the fin base cross-section and the cowlings...

I have obtained the real dimensions for the forward clear parts, and will share my findings with photos shortly: From the wing leading edges forward, the entire fuselage pod is too short, the clear parts far too shallow on both kits, and the entire front fuselage area needs to be completely rebuilt dimensionally almost from scratch... It is doeable with the kit parts for the fuselage, and a lot of work for completely new scratchbuilt clear parts...

PROFILE
Krischan (Christian Mundt) said
Thank you for the information, Gaston.
I will not be able to rebuild the fuselage

, but I just ordered the engine and propeller sets from Vector. I think this will improve the overall look of the kit quite a lot.