1⁄48
Romanian PZL 23 Karaś I & II
Tuesday, March 05, 2013 - 07:54 PM UTC
By MECENAS
Mirage Hobby has sent us in a newsletter revealing some details about their recently released Karaś bomber in the Romanian service.
PZL-23 KARAS I & II

Only about 21 Karaś aircraft in A and B versions (including B-II) has been evacuated from
Poland to Rumania after the Soviet invasion on 17 September 1939.

The Rumanians have subjected them to a general overhaul, and by cannibalizing parts they
managed to assemble 19 airworthy aircraft making an interesting (from modellers' point of view) mixture of aircraft types and versions, known as Karas I and Karas II.
Some has armour plate fitted behind the gunners' position. Karas of the 73 Bomber Flight took part in the second phase of Operation 'Barbarossa', during fighting over Dnester, at Odessa and Stalingrad.

Attached picture of the decal sheet reveals four painting option. One is marked as bonus. Individual planes marking are suitable for machines with the following numbers: 6, 10, 12 and 13 (which is bonus).

The model kit is already available in sale.

Please remember, when contacting retailers or manufacturers, to mention that you saw their products highlighted here - on AEROSCALE.
Click Star to Rate
2 readers have rated this story. 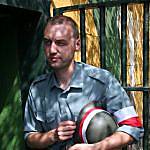