1⁄48
Halberstadt CL.IV
Sunday, August 02, 2015 - 08:59 PM UTC
By RICHARD TONGE
Mirage Hobby has sent us news of a upcoming release in 1/48 scale:
Karl Thies, chief designer of the Halberstädter Flugzeugwerke, G.m.b.H., designed the CL.IV as a replacement for the CL.II. As the CL.II had proven to be particularly effective in the ground support role, the focus of an improved version was to create a specific ground attack aircraft.

The new CL.IV featured a shorter, strengthened fuselage and a horizontal stabilizer of greater span and higher aspect ratio than that of the CL.II. These changes, along with a one-piece, horn-balanced elevator, gave the CL.IV much greater maneuverability than its predecessor. After tests were completed of the prototype in April 1918, at least 450 were ordered from Halberstadt, and an additional 250 aircraft from a subcontractor, LFG (Roland).
Courtesy Wikipedia.

Please remember, when contacting retailers or manufacturers, to mention that you saw their products highlighted here - on Aeroscale.

Click Star to Rate
2 readers have rated this story.

JackFlash
I wonder if they will include Lozenge or have separate issues of the same mold with or without it? That is what they did for the Halb. CL.II kit.
AUG 04, 2015 - 12:40 AM

PiotrM
Hi All, The # 481402 Halberstadt CL.IV model will include the Lozenge and dots decals. For this model Mirage Hobby choose three painting versions, from last two month of the war, when German 5th and 17th army fought against the U. S. General John J. Pershing army near Meuse-Argonne and Saint-Mihiel. At this time Halberstadts CL.IV and other aircraft from Schlasta were combined in big groups called "Schlachtgruppe" and strongly cooperated with ground armies... Piotr M
SEP 13, 2015 - 07:28 PM 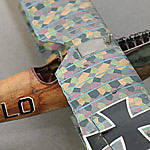